UP, TuSimple partner to move freight on AV truck lane in Arizona 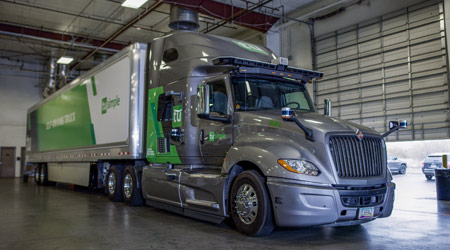 UP will use its Loup Logistics subsidiary to coordinate freight shipments and support seamless movements between rail and the first and last mile of delivery, TuSimple and UP officials said in a joint press release.

Starting this spring, TuSimple plans to carry "Driver Out" freight for UP by using autonomous vehicle (AV) technology to deliver goods.

"Partnering with TuSimple allows us to extend our operations beyond our rail hubs and serve our customers faster and more efficiently," said Kenny Rocker, UP executive vice president of marketing and sales. "This groundbreaking autonomous driving technology and our partnership provide us a significant opportunity to scale the technology in our network, proactively reducing global supply chain congestion."

In December 2021, TuSimple accomplished its first Driver Out semi-truck run. Since then, it has reported six additional successful fully autonomous runs. The seven total runs covered over 550 cumulative miles on open public roads without a human in the vehicle, without any teleoperation and without traffic intervention, TuSimple officials said.

In the future, TuSimple plans to expand its Driver Out program to incorporate daytime runs and new routes while also improving its AV technology.

TuSimple is expanding autonomous freight lanes across the Sunbelt to scale its operations in preparation for a nationwide expansion.