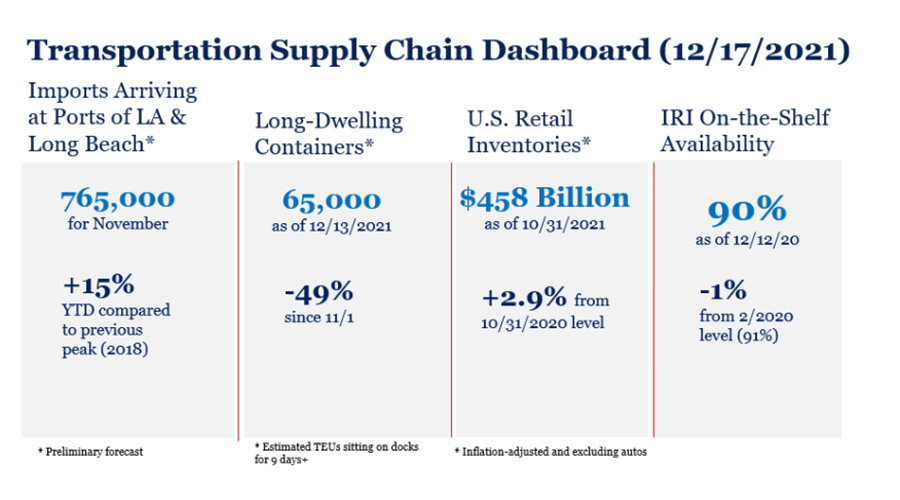 President Joe Biden yesterday touted the progress made by ports in Los Angeles and Long Beach, California, in helping to unclog the nation's backed-up supply chain.

In comments made to the Supply Chain Disruptions Task Force, Biden said the ports have “nearly cut in half” the number of containers sitting on docks for more than eight days.

"This is striking progress since November," Biden said, according to a White House transcript of his remarks. "Right now, the number of containers moving through our ports is higher than ever."

Biden attributed the improvement to White House talks with the ports’ officials and longshoremen, who agreed to speed up every step in the process, from the ports to trains to trucks.

The new Infrastructure Investment and Jobs Act includes $17 billion to help speed up and modernize ports. The U.S. Department of Transportation (USDOT) today is scheduled to announce more than $200 million in grants to ports nationwide.

For example, the Port of Long Beach just learned it will receive a $52.3 million grant from the USDOT’s Maritime Administration to help fund development of the Pier B on-dock rail support facility. The project will enable the port to shift more cargo to on-dock rail and maximize on-dock intermodal operations.

Construction is scheduled to begin in 2023, with the first arrival, departure and storage tracks to open in 2025. Additional tracks are projected to come online in 2030 and the entire project is slated for completion in 2032.

Meanwhile, the Port of Los Angeles announced earlier this week that it is on track to break a new record for cargo throughput in 2021, processing more volume than any Western Hemisphere port.

With two weeks remaining in 2021, officials anticipated the port’s final volume to reach 10.7 million 20-foot-equivalent units, which would represent about a 13% increase over the port’s previous annual volume record set in 2018.