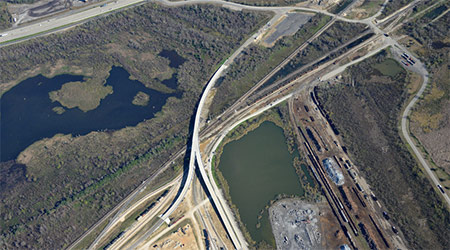 The Port of Beaumont, Texas, has opened its Orange County Terminal Overpass, which was designed to improve access into a liquid bulk transload facility operated by Jefferson Energy Cos.

The overpass, which opened late last month, will allow for a more efficient flow of passenger vehicles and freight trucks without impeding safe movement of railroad traffic, port officials said in a press release.

Located on the south side of Interstate 10 and east of the Neches River in Orange County, the overpass project cost $12.5 million, and was partially funded by a $6.4 million Federal Highway Administration Congestion Mitigation and Air Quality Grant.

Built in 2001, the terminal is a public-private partnership between the port and Jefferson Energy. As the facility expanded from 2012, so did the need for the overpass to circumvent the main line tracks as well as several other Jefferson Energy operational lines.