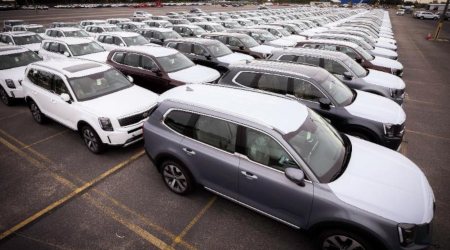 Kia is one of the largest customers at the Port of Savannah, from which the automaker has shipped nearly 350,000 20-foot-equivalent container units (TEUs) over the past 10 years, according to a GPA press release.

And earlier this year, Kia began exporting its Telluride SUVs through the Port of Brunswick.

"With the recent export of the first Kia Tellurides via Brunswick, the carmaker is opening up new global markets for goods made right here in Georgia," Georgia Gov. Brian Kemp said in the press release.

CSX and Norfolk Southern Railway serve both the ports of Savannah and Brunswick.

Meanwhile, the GPA announced it logged an 8.8 percent growth in container volume between July 2018 and February 2019 versus the same period in the previous fiscal year.

Although the GPA has posted record cargo totals for the fiscal year to date, the GPA logged an 8.5 percent decline last month, for a total of 312,042 TEUs versus year-ago levels.

"Last month brought an end to the authority's 27-month run of year-over-year container growth, but our outlook for March and the remainder of the fiscal year is strong," said GPA Executive Director Griff Lynch.