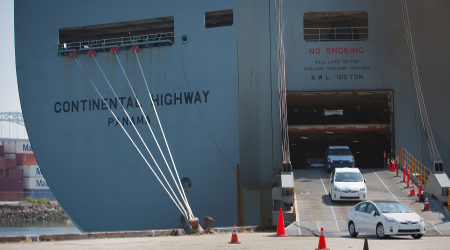 The study found that the project would have no significant impacts on the environment. The public can submit comments on the draft study until July 10.

Toyota Logistics Services operates a marine terminal at the port, where new automobiles are off-loaded from ships, processed and transported to various destinations by rail or truck. The company proposes to streamline its operations by demolishing existing office, car washing, fueling, auto body and other facilities, and consolidating many of the functions into a single building.

The project also calls for building a 2.3-megawatt fuel-cell power plant and a new fueling station with hydrogen-dedicated pumps.

A rail facility at Pier B primarily is used by Pacific Harbor Line, which provides dispatching and switching services, and interchanges with BNSF Railway Co. and Union Pacific Railroad.