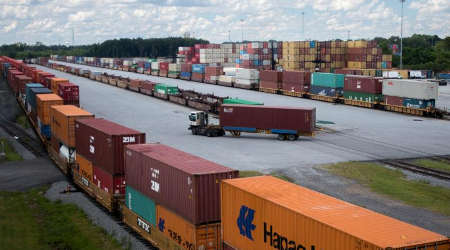 The board approved $42.27 million in expenditures as part of GPA's $128 million Mason Mega Rail Terminal. The project not only will expand the Port of Savannah's on-dock rail capacity by 100 percent, but position Savannah to rapidly increase service to an arc of inland markets from Memphis to Chicago, port officials said in a press release.

So far, $90.7 million has been allocated to the project. Construction is slated to begin next month and be completed by the end of 2020, they said.

Moreover, the board approved a $13.2 million project to expand the existing Gate 8 at Garden City Terminal. The addition will help the GPA absorb future growth and offer a better link to the Jimmy Deloach Parkway, which provides a direct truck route to Interstate 95. The project will expand the terminal's gate infrastructure by 12.5 percent for a total of 54 truck lanes.

"In addition to expanding capacity, we will also reduce the impact on our local community," said GPA Executive Director Griff Lynch. "The new pre-check lanes will reduce truck congestion and the Mega Rail Terminal will significantly reduce or eliminate rail crossings."

The board's actions follow last week's report that the GPA logged a 32 percent growth in containerized trade for October, which marked a record for Savannah, port officials said.

The Port of Savannah offers Class I service via CSX and Norfolk Southern Railway.