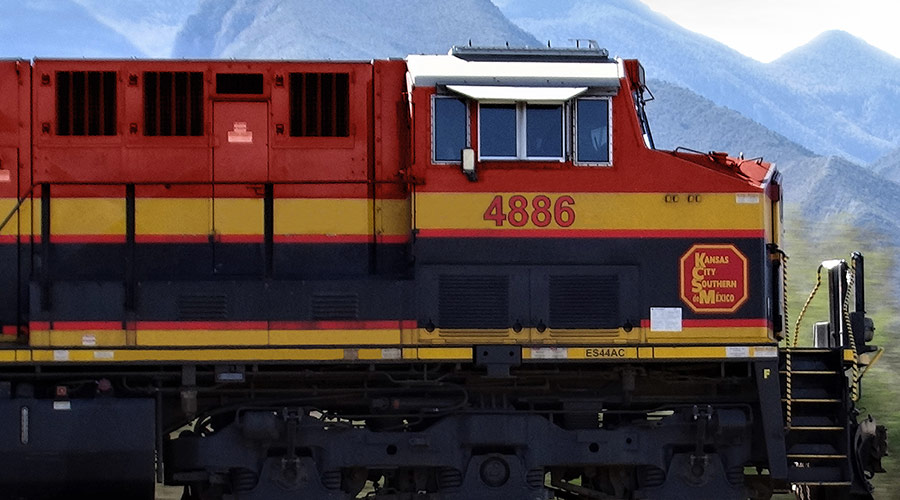 It's been an up-and-down year so far for Kansas City Southern. And the swings have been fairly wild even though 2020 hasn't yet reached the midpoint.

Nearing the end of the first quarter, it appeared KCS had reached high ebb. The Class I was capping off stellar financial performance that included record revenue at $731.7 million (up 8 percent year over year), a best-ever adjusted operating ratio at 59.7 (down 6.5 points) and strong adjusted earnings per share at $1.96 (up 30 percent). Plus, volume rose 4 percent in Q1 to a solid 560,800 carloads.

But a few weeks before the quarter ended, the COVID-19 pandemic struck. Business then plunged in April and May as KCS dealt with customer plant closings and diminishing demand in several commodities. On top of that, economies became extremely unstable in the United States and Mexico, where the railroad generates half of its revenue and nearly half of its volume annually.

Weekly traffic figures underscore the pandemic's impact. Total carloads and intermodal units in April's last week ending May 2 plunged 30 percent year over year to 30,520. Weekly volumes in May remained down more than 20 percent.

To weather the crisis, KCS ratcheted up efforts to rightsize resources and manage expenses, counting heavily on its version of precision scheduled railroading to help with efficiencies. The Class I adjusted train service plans to match fast-declining volumes, consolidated train starts to foster longer and more-efficient trains across its network, and continued to cut crew starts. As a result, train counts through KCS' key Houston terminal complex were reduced by 50 percent from February to late April.

Fortunately, news broke about a potentially uplifting development about the time train counts hit such a low.

On April 24, U.S. Trade Representative Robert Lighthizer announced the United States-Mexico-Canada Agreement (USMCA) would enter into force July 1. All three nations had complied with their commitments, with the United States' completion of domestic procedures serving as the pact's final implementation step.

Trading in a relic for something more modern

The USMCA will replace the 25-year-old and rigid North American Free Trade Agreement (NAFTA). The more modern and flexible USMCA will improve rules of origin for automobiles and other vehicles; bolster disciplines on currency manipulation; modernize and strengthen food and agriculture trade; create new protections for U.S. intellectual property; and ensure trade opportunities for U.S. services. It contains what are considered global best-in-class trade provisions in such areas as agricultural market access, digital trade, financial services, anti-corruption and regulatory policies. 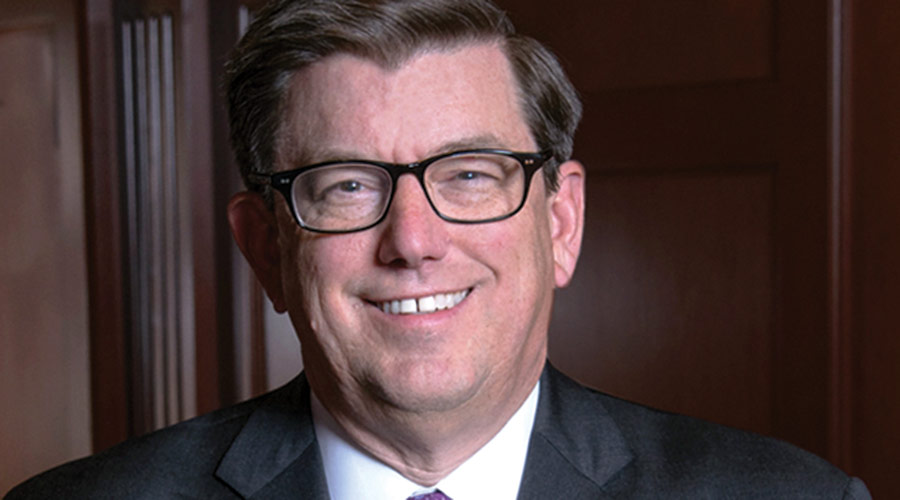 "We need to keep resources close so if we see some rebound, we are prepared." — KCS President and Chief Executive Officer Patrick Ottensmeyer

The new trade pact is a much-needed boost both for KCS — including its crucial Kansas City Southern de Mexico (KCSM) subsidiary — and the entire rail industry. In Mexico, KCSM operates the shortest rail route between Mexico City and major crossborder point Laredo, Texas, serves most of the major auto plants and transports a lot of refined petroleum products.

Now, KCS leaders are encouraged about the company's prospects of not only surviving the rocky pandemic period but eventually thriving. The USMCA will mark the beginning of a historic new chapter for North American trade, KCS President and Chief Executive Officer Patrick Ottensmeyer believes.

"These enhancements will deliver more jobs, provide stronger labor protections and expand market access, creating new opportunities for American workers, farmers and ranchers," he says. "We will have clarity now with trade between the U.S., Mexico and Canada, and with less risks."

The USMCA will provide strong umbrella protections for long-term investments made in other countries without risks of foreign intervention. For KCS, that means a higher level of certainty for continuing to invest in yard and line-of-road expansions, and new refined products terminals in Mexico, says Ottensmeyer.

"We plan out projects from two to three years — there's a long lead time for projects, which is the nature of our business," he says. "This will help with our planning. The Mexico growth story has been around a long time, and we believe in it."

The certainty afforded by the USMCA will drive more long-term investments by the entire rail industry, says Association of American Railroads (AAR) President and CEO Ian Jefferies. The agreement will have a dramatic impact on international business for North American railroads since 42 percent of their traffic and 30 percent of their revenue is generated by international rail movements, he says.

"The supply chain is so integrated in North America," says Jefferies. "I think it is going to be a shot in the arm to the economy and to commerce in the long run."

The rail industry has as much to gain as any in North America once the USMCA is in place, says Neil Herrington, senior vice president-Americas for the U.S. Chamber of Commerce, which was heavily involved in the agreement's negotiations over the past two-plus years.

The auto sector — which is vital to rail and by far the biggest industry impacted by the agreement — needed to be more integrated since an auto component on average crosses the border eight times by the time it reaches a vehicle, says Herrington. For example, a seat belt is first partially produced in Mexico, railed to Canada to have the buckle added and then railed to the United States for installation.

"In terms of North American-produced content on a vehicle, NAFTA called for 62 percent but the USMCA increases that to 75 percent," says Herrington.

The USMCA also will enhance market access for various dairy and poultry products. For railroads that serve dairies in the U.S. heartland, that will create opportunities to transport those products to Canada, says Herrington.

In addition, the agreement calls for an expedited release of shipments, expanded scope of advanced rulings by customs authorities and provisions requiring an online searchable database for customs information.

Despite the intriguing reforms and new trade policies, it's difficult for the rail industry to completely gauge the USMCA's impacts because of the ongoing continental and global chaos, says the AAR's Jefferies.

"Right now, you're looking at everything through the lens of the pandemic, which is unprecedented," he says.

Because of COVID-19, many multinational companies are re-examining their supply chain strategies to determine if any changes should be made to make them more manageable and secure, says Jefferies. 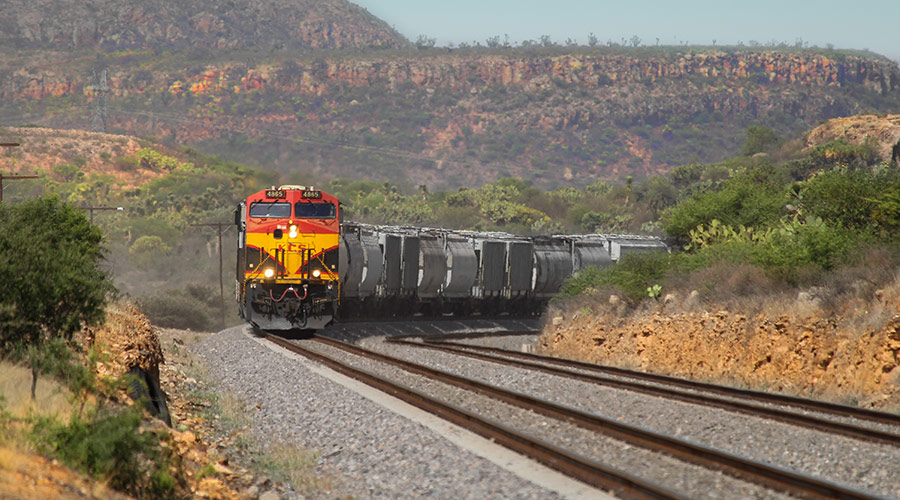 Grain traffic — which is vital to KCS in both the United States and Mexico — is expected to pick up by June’s end.
KCS

When Lighthizer made the announcement about the USMCA, he issued a statement stressing that the pandemic demonstrates the United States more than ever needs to increase manufacturing capacity and investments in North America, and the agreement is "a landmark achievement in that effort."

Although there's no organized effort to end supply chain ties to China or Asia, there's no debate that due to the pandemic and other factors, many companies are considering whether to bring supply chains closer to their markets, says Herrington.

"The USMCA has the potential to host those supply chains," he says.

The combination of the USMCA and the emerging desire of global supply chain leaders to disfavor connections with China presents an enormous opportunity for investments in North America, says Ottensmeyer.

"North American railroads will play a critical role in facilitating this opportunity and leading our countries out of the current recession," he says. "Railroads connect the U.S., Mexico and Canada, and our networks are the backbone of North American supply chains."

However, the misalignment of government policies across North America — such as the lack of coordination of "essential services" in the three countries involving medical supplies and other items — could potentially result in the underperformance of existing, well-established supply chains, Ottensmeyer warns.

If the nations can better coordinate health and safety initiatives with other important issues, there's a path for the continent to emerge as an even stronger force in global manufacturing and logistics, he believes. Those issues include security and cybersecurity, efficiency and workforce development.

Ottensmeyer is convinced tighter coordination and alignment of priorities between the private sector and three governments would help chart a sustainable course of action. For example, the USMCA calls for the establishment of a committee for competitiveness that would include authorities from the three countries and consultation from other parties.

"We would strongly encourage authorities to use this moment to establish a meaningful, high-level interaction that includes key members of the private sector to ensure that, unlike the 25-year-old NAFTA, the new USMCA stays current as circumstances change," says Ottensmeyer.

Although NAFTA never changed or evolved after it took effect, there are triggers and major turning points incorporated into the USMCA that would sunset certain provisions if necessary to help keep the new pact relevant, says Ottensmeyer.

KCS has invested more than $5 billion in its network over the past 25 years, including infrastructure improvements in Mexico for refined petroleum products. Because of the potential traffic growth of that sector, the Class I will continue to support that business with investments in the future, such as by loading up capacity around the border, says Ottensmeyer.

For example, KCS is pursuing a long-term plan to build a second international bridge in Laredo, then build and expand yards where appropriate to support that added capacity.

Negotiations over the USMCA were contentious at times between the three nations, predominantly over protections for infrastructure, energy and telecommunications investments made by companies in countries other than their own. At various points, Ottensmeyer says he wasn't sure what was going to happen next or if the pact would come to fruition. But then the business community became involved in 2019 and helped make clear the importance of the pact.

"The collective voice of the business community was a big help, especially with how it impacts communities and customers," says Ottensmeyer. 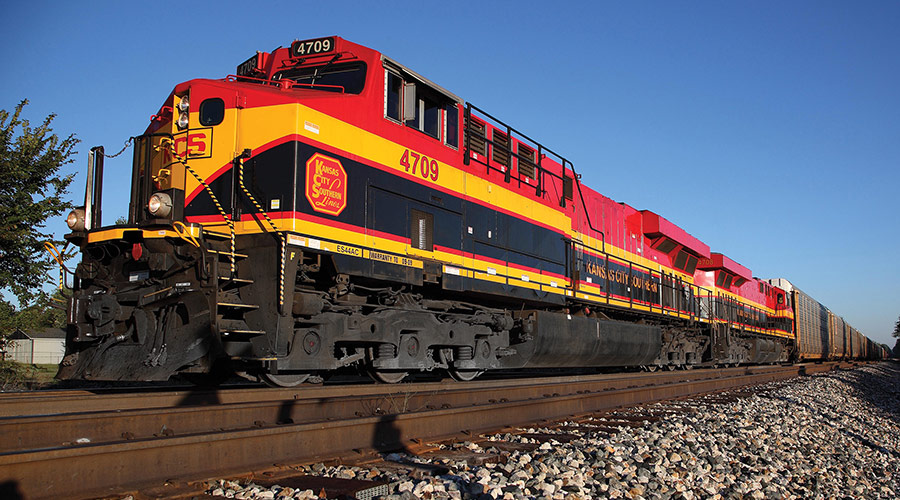 Vehicle assembly plants are slowly reopening after temporarily closing due to the pandemic, so the Class I’s auto volume could soon tick up.
KCS

Resources now are rightsized, and no new or additional layoffs, yard closings or other reductions are in the offing, says Ottensmeyer.

"We need to be on our toes and be ready for when volumes return. We can't cut too deep," he says. "We need to keep resources close so if we see some rebound, we are prepared."

In April, KCS leaders had proposed two financial performance scenarios based on the pandemic's impact. One assumed a 15 percent revenue decline in Q2 followed by 10 percent and 5 percent drops in Q3 and Q4, respectively. The other scenario proposed a more dramatic revenue decline of nearly 30 percent in Q2 — which would equal KCS' worst quarter during the 2009 recession — followed by the same declines of 10 percent and 5 percent in the succeeding quarters.

What could help offset those models is grain traffic that's expected to pick up by this month; food shipments that have been steady and might slowly increase; auto volume that is poised to tick up as production plants now slowly resume production; and intermodal movements that could begin to climb as consumer demand rises in the United States and Mexico.

And, of course, quite a few traffic segments could gain a boost from the USMCA. But it's hard — and foolish — to try to make any projections due to the pandemic, says Ottensmeyer.

Although COVID-19 has tempered some of the excitement surrounding the USMCA, it's very encouraging that many of KCS' customers likely will build more North American-concentrated supply chains, he says. That would help the Class I eventually seize some of its long-term growth opportunities with autos and auto parts, refined petroleum products, cement and other traffic in Mexico.

"This ought to be a watershed North American moment with the USMCA. Still, you wonder what will life be like on July 1," says Ottensmeyer. "But railroads are in the thick of it and will play a part in it."