Local, state and federal officials gathered in Duluth, Minn., in early spring to celebrate the beginning of a new era in Great Lakes intermodal transportation. Ground officially broke on May 27 for the Port of Duluth Intermodal Project, a $17.7 million redevelopment effort that will restore service to an abandoned dock at the western end of the Great Lakes St. Lawrence Seaway.

The completion of this long-awaited rebuild and expansion will enhance the Duluth Seaway Port Authority’s intermodal capabilities by increasing capacity to handle more heavy-lift and project cargo, installing rail connections for two of the four Class I railroads with access to the port, and adding enhancements for safety and security that ultimately will bolster the competitiveness of the entire region by increasing freight capacity via the seaway system. Port officials expect this first phase of reconstruction to be completed in fall 2016.

“It will be our largest capital project since the formation of the port authority back in the 50s,” says Vanta E. Coda II, the authority’s executive director. “Transportation is the elasticity of commerce, and the Great Lakes are great off-ramps.” The role of Midwestern ports is expanding in today’s global economy, as shippers seek alternate transportation routes. Inland port visibility increased even more during recent trucker shortages and West Coast labor disputes that snarled international trade at ocean-side ports up and down the Pacific earlier this year.

The Port of Duluth-Superior isn’t the only Midwestern inland port undergoing major expansion projects that include rail-related upgrades. “We have to stay ahead of the curve,” says Frank Papa, sales manager for America’s Central Port, the St. Louis region’s only full-service, public intermodal port, which is in the midst of its $50 million South Harbor project that includes adding two rail loops to an existing 9,600-foot-long loop that will connect to the new harbor and provide access for six North American Class I carriers. “The completion of that second harbor is going to have a major impact, especially here in the Midwest.”

“Port authorities are seeing what’s happening nationally and planning for the future,” says Andres. “Economic development has been the catalyst for river port authorities for quite some time, and for the most part, ports are created for the main purpose of driving economic development through the advantage of infrastructure such as river, rail and highways. It takes all three modes for a port to be successful.”

It’s no secret that Chicago is the world’s largest rail hub. At least a dozen mainline railroads feed into selected terminals at the Port of Chicago, and all have reciprocal switching arrangements. But with the Chicago Area Transportation Study for years calling for the addition of more port acreage than the city has available, alternate options are clearly needed.

Which is why smaller ports in the Midwest are doing what they can to keep intermodal transportation booming, especially as the definition of “intermodal” broadens beyond the movement of containers involving two or more modes of transportation to include conveyance of bulk and other non-container goods.

What follows is a rundown of recent developments at key Midwestern inland ports and rail’s impact at each one. 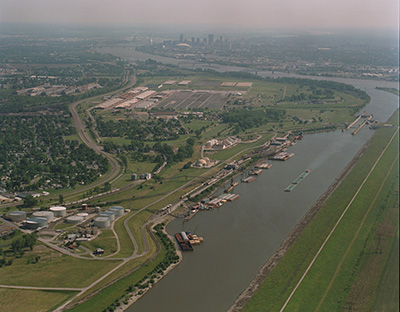 The Port Harbor Railroad, the port’s own short line, provides 24-hour local switching and connections to the TRRA and Class I carriers. Several locomotives are stationed onsite to accommodate the increasing number of tenants requiring on-demand rail service.

For now, the port’s 6,000-foot North Harbor is the most northerly ice-free port on the Mississippi River. Upon completion of the South Harbor project located just south of Locks #27, that new port will be the most northerly lock-free one on the Mississippi. The project, which involves converting a former 800-acre U.S. Army base, “has been in the dreaming stage for decades,” says Ben McCall, a senior planner at the port. It received financial backing from a Transportation Investment Generating Economic Recovery (TIGER) grant from the U.S. Department of Transportation, as well as the Illinois Department of Commerce and Economic Opportunity.

The expanded rail capabilities are expected to attract trains in excess of 100 units. Although the South Harbor isn’t slated for completion until Oct. 1, Union Pacific Railroad already is conducting trial runs on the new track “to see how we’ll work it,” Papa says. “It’s a test for us, and we’ll pass it.”

Ranked among the top 20 ports in the United States based on cargo tonnage, the Port of Duluth is located at the crossroads of four Class I railroads: BNSF Railway Co., CN, Canadian Pacific and UP. Primary cargo includes forest products and steel. 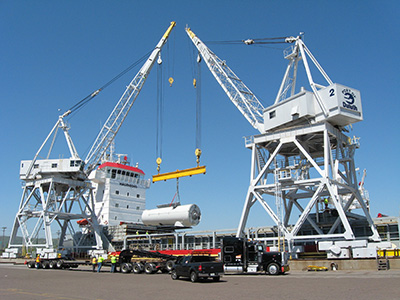 Coda says the port’s current intermodal project will provide new access for BNSF and UP, giving the shipping community new options. Located on property that formerly housed a large grain elevator, the project has been in the works for almost 30 years and took five TIGER grant applications to become reality. In the end, funding came from a $10 million TIGER grant, the Minnesota Port Development Assistance Program, Minnesota’s Contamination Cleanup Grant program and the Duluth Seaway Port Authority itself. Completion is scheduled for September 2016.

The port will have 75 acres of infrastructure in place for one or more tenants. “We didn’t even make the radar screen for site selectors prior to this project,” Coda says, adding that interest from potential lessees is increasing. “We’ve already received some tire kickers.” 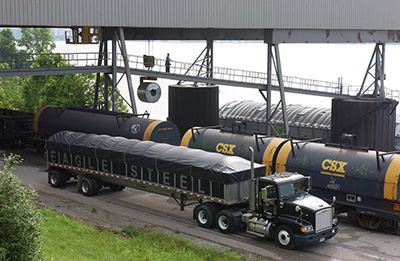 Steel coils are moved via rail, barge and truck at the Port of Indiana-Jeffersonville
Photo: Ports of Indiana

Indiana, whose borders are 57 percent water, ranks sixth in the country in domestic waterborne shipping, and the Ports of Indiana operates a system of three ports on the Ohio River and Lake Michigan. In 2014, the oldest of those ports — Port of Indiana-Burns Harbor — handled its highest annual volume since the facility opened in 1970. Total tonnage climbed 30 percent compared with 2013, driven by strong shipments of steel, grain and salt.

Burns Harbor offers a direct interchange with 16 different railroads in nearby Chicago, including Class Is, while Norfolk Southern Railway provides direct service to all sites on port property. The port’s strategic location at the intersection of two of the world’s busiest waterways and all of the nation's Class Is provides significant competitive advantages for multimodal companies that locate at the Burns Harbor facility, Ports of Indiana officials say. 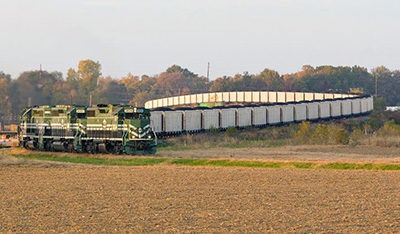 In fact, all three Ports of Indiana had a banner year in 2014, with collective tonnage surpassing 10 million and involving 60,000 railcars. “That will give you a sense of what role rail plays in our operations,” says Phil Wilzbacher, director of the Ports of Indiana-Mount Vernon. “We view our ports as multimodal transportation hubs, and access to water is obviously important. But that doesn’t override the way we view rail and road.”

To that end, each of the three Ports of Indiana will undergo rehabilitation of existing rail infrastructure, including the laying of additional track and the creation of more railcar storage — beginning at Burns Harbor this year, followed by Jeffersonville and Mount Vernon in future years.

The Port of Milwaukee is served by two Class I railroads, UP and CP, which primarily transport biofuel, cement, salt, fertilizer, fly ash and steel. Both carriers provide direct pier delivery at all port facilities, as well as necessary switching services. The port owns and maintains 13.5 miles of rail track, which connects with Class I main lines.

The Port of Milwaukee recently received a $1.5 million Freight Railroad Preservation Program grant for the reconstruction of the Lake Classification Rail Yard on Jones Island. Deteriorated tracks will be upgraded to handle greater railcar weights (up from 90 tons) which will significantly boost rail traffic, says port director Paul Vornholt. A number of companies want to ship products via rail through the port but have been unable to do so because of poor track conditions, according to Wisconsin Department of Transportation officials.

“We suffered a blow when CP stopped doing intermodal service to the Port of Milwaukee,” Vornholt says, adding that the rail enhancements will make the port more appealing to potential tenants and other railroads.

There will soon be at least one more intermodal Midwestern inland port, with an additional five ports possible as part of the long-term goal of the Mid-America Port Commission. Established in 1999 as an economic development catalyst for 26 counties in Illinois, Iowa and Missouri, the commission is developing the first port along the Mississippi River in Quincy, Ill., to be served by BNSF and NS. Plans call for one more port in Illinois and two each in Iowa and Missouri. The ports will be completed in phases as funds become available.

Meanwhile, plans are in the works in Des Moines, Iowa, to develop a 20-acre plot of land north of the Des Moines River for a rail port facility that would be accessible by BNSF, NS, UP and the Iowa Interstate Railroad. According to the project’s feasibility study, the facility would serve area businesses within a 150- to 200-square-mile region, and could slash transportation costs for some of those businesses by half.

More than 2,400 miles south of Des Moines, the highly publicized $5.25 billion expansion of the Panama Canal — the Central American waterway that connects the Atlantic and Pacific oceans via the Caribbean Sea — is expected to double capacity by 2016.

At this point, Midwestern inland port authorities aren’t certain what effect the construction and its results will have on their operations. Possible scenarios include increased traffic up the Mississippi River, as well as greater potential for congestion and subsequent shipping delays.

Regardless of what happens, this much is certain: Changes are coming — not only as a result of the Panama Canal expansion but also because of shifting shipping patterns and needs. As the Port of Duluth’s Coda puts it: “At the end of the day, freight finds the path of least resistance.”