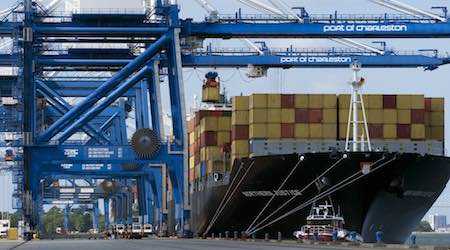 To handle larger ships, the South Carolina Ports Authority plans to deepen the Port of Charleston's harbor to 52 feet.

The Panama Canal revolutionized global trade when it opened more than a century ago. Now, the agency charged with operating and managing the canal is close to finishing a $5.25 billion project to add a third set of locks, which will accommodate larger ships. The expansion began in 2007 and will be officially inaugurated at the end of June.

Currently, only ships with a carrying capacity of up to 5,000 20-foot equivalent units (TEUs) can traverse the canal. The expansion will allow for the passage of so-called “post-Panamax” megaships, which can carry 13,000 TEUs. This could mean a significant uptick in Asian containerized traffic heading to ports on the U.S. East and Gulf coasts, some observers say.

The South Carolina Ports Authority (SCPA), for example, is advancing a $510 million project to deepen the Port of Charleston’s harbor from 45 feet to 52 feet. With a deeper harbor, the port will be able to better handle larger ships coming from the expanded canal.

In January, the U.S. Army Corps of Engineers recommended the harbor deepening project to Congress for authorization. The project is slated for completion by the end of the decade.

"It's a game changer for us," says Jim Newsome, SCPA's president and chief executive officer. "That will make us the deepest harbor on the East Coast, and we think that’s really going to matter."

In 2015, SCPA handled nearly 2 million TEUs, representing a 10 percent increase over the previous year. Newsome believes there will be continued growth after the Panama Canal expansion is completed.

As part of a $2 billion plan to improve port-related infrastructure over the next decade, SCPA also is building the $700 million Hugh K. Leatherman Sr. Terminal. The 300-acre container terminal will increase the port's capacity by 50 percent, Newsome says.

In addition, the authority has spent $10.1 million for new super post-Panamax cranes at the North Charleston Terminal, along with $50 million to build an inland port in Greer, S.C., which is served by Norfolk Southern Railway.

Overall, SCPA is "very ready" to handle any additional cargoes coming through the canal, Newsome says, noting that the Port of Charleston currently handles 11 post-Panamax vessels each week.

The opening of the Panama Canal expansion will continue what Newsome sees as a long-term trend of Asia's U.S.-bound cargo shifting from West Coast to East Coast ports. Currently, about 65 percent of that cargo is shipped to western ports. After the expansion opens, the split could level off to 50-50 between the two coasts, Newsome estimates.

"Most of this container shipping is about lowest-cost economics," he says, noting that about 70 percent of the U.S. population lives east of the Mississippi River.

As the population continues to grow in the southern and eastern United States, shippers will be able to reach a wide swath of the populace by rerouting ships to the East Coast, Newsome believes.

Meanwhile, PortMiami also is expecting a surge in containerized traffic following the widening of the Panama Canal. In July 2015, the port wrapped up a $220 million project to deepen its own shipping channel from 42 feet to 52 feet.

Before the dredging project was completed, the Florida port also purchased four additional super post-Panamax cranes, which are able to handle cargo ships with a capacity of over 10,000 TEUs. In total, PortMiami has completed more than $1 billion in infrastructure upgrades to accommodate bigger ships, says spokeswoman Andria Muniz-Amador. 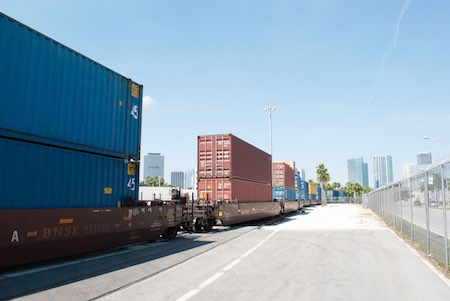 The port also has worked closely with Florida East Coast Railway LLC (FECR) to reintroduce on-port rail service. In partnership with FECR, the U.S. Department of Transportation and the state of Florida, PortMiami invested nearly $50 million to connect the port with the railroad's Hialeah intermodal yard and the national rail system.

The port wrapped up that project in fall 2014. Now, shippers can reach more than half of the U.S. population within one to four days through PortMiami, port officials say.

"A lot of people are going to be moving traffic through the Panama Canal, and we’re certainly collectively preparing for it," says FECR President and Chief Executive Officer James Hertwig. "We're real bullish on it."

Currently, FECR handles about 10 percent of PortMiami’s container traffic, but Hertwig expects that share to rise 20 percent to 25 percent following the canal expansion.

"These containers are going to end up being where the population is," he says, noting that Florida is now the third-most populous state, following California and Texas. "Most carriers will tell you that the economics of the big ships is very important to them."

PortMiami leaders say they're already seeing results of their efforts. The port handled 1,007,800 TEUs during its 2015 fiscal year, marking a 15 percent increase compared with the total from the previous fiscal year. What’s more, the figure represents the port’s strongest containerized cargo traffic in a decade.

Whether the port will continue its positive trajectory following the canal’s expansion remains to be seen, but PortMiami leaders remain optimistic.

"Thanks to these projects, a lot of the services that have come through PortMiami have stayed, and we're anticipating that they continue to stay," says Muniz-Amador.

Prep work on the third coast

The Port of New Orleans is hoping for similar staying power on the Gulf Coast. The port intends on deepening its harbor to 50 feet, but that won’t be completed before the expansion opens, says President and CEO Gary LaGrange. Given current market demand, he doesn’t believe it’s imperative to be ready for 13,000-TEU-carrying ships right out of the gate.

"We can handle up to a 10,500-TEU vessel. That’s pretty darn sizeable," LaGrange says, noting that the largest ship the port has ever handled carried 9,000 TEUs.

In addition, the port plans to add six more gantry cranes, bringing its total number of cranes to 12.

The port also is teaming up with CN, which has been steadily prepping for any increases in intermodal traffic at southern U.S. ports. In June 2015, the Class I signed supply-chain agreements with the Port of New Orleans and the Alabama State Port Authority, which owns public terminals at the Port of Mobile.

"The expanded Panama Canal is expected to offer greater freight traffic opportunities to the ports of New Orleans and Mobile," said CN Executive Vice President and Chief Marketing Officer JJ Ruest in an announcement last year. "Our plan to implement level-of-service agreements at these two ports and raise their involvement in rail transportation should help them take advantage of rising container trade with Asia and South America."

The agreements fit into the Class I's plan to pick up more intermodal traffic, which is CN's fastest-growing business segment. Last year, intermodal accounted for 23 percent of the railroad's total revenue.

"CN has ample capacity in the Gulf region to accommodate additional imports," said spokesman Mark Hallman in an email.

For its part, CSX is collaborating with ports on both the East and Gulf coasts as they complete various infrastructure upgrades. The railroad also is investing in its intermodal network. For example, the Class I continues to advance the $850 million public-private National Gateway initiative. Introduced in 2008, the initiative calls for updating CSX's tracks and infrastructure to allow double-stack trains to move from mid-Atlantic regions to the Midwest.

"In effect, we are investing in network flexibility that can quickly and nimbly adapt to changes in the market environment, including any potential shifts in freight flows associated with the Canal expansion," said CSX spokeswoman Melanie Cost via email.

Meanwhile, officials at Kansas City Southern don't anticipate any "material increase" in the Class I's traffic as a result of the canal's expansion, said spokeswoman Doniele Carlson in an email. Instead, KCS strategists view the Port of Lazaro Cardenas on Mexico’s West Coast as an ideal way for Asian traffic to flow into the U.S. market. Kansas City Southern de Mexico S.A. de C.V. provides exclusive rail service at the port.

Although the Panama Canal expansion represents a "positive step toward enhancing world trade," it's still faster for containerized cargo to move through U.S. West Coast ports, BNSF Railway Co. officials believe. In particular, the sailing time from Asia to the West Coast is quicker by an average of 10 to 12 days, said BNSF spokeswoman Amy Casas via email.

Opportunities in the west

Meanwhile, the Port of Long Beach, Calif., is working on a slew of capital improvements of its own. Over the next decade, the port plans to spend $4 billion on infrastructure upgrades. That figure is "well ahead of any other port in the country," says Noel Hacegaba, managing director of commercial operations.

One major project underway is the $1.3 billion Middle Harbor Terminal Redevelopment Project, which calls for combining two aging shipping terminals. By the time the project is fully built out by 2019, the new terminal will have an annual throughput capacity of 3.3 million TEUs, which is more than double the existing terminals' capacity.

A key component of the project involves expanding on-dock rail facilities by as many as 47 acres, which will accommodate up to 2,100 trains annually by 2025. The project will help shift more cargo shipments from trucks to trains.

The Port of Long Beach is banking on these and other upgrades to maintain a competitive edge over its counterparts in the East. Shippers on South America's East Coast may even opt to send their goods through the expanded Panama Canal to the western United States, Hacegaba says.

"We actually see the Panama Canal expansion as an opportunity for us," he adds.

For John Martin, a port economist with Martin Associates, any impacts of the expansion will depend on demand for containers and shippers’ costs. If the canal can provide a logistics cost advantage, more shippers will take advantage of it.

"It's hard to say what's going to happen," Martin says. "What we can say is that the ships are going to be bigger."

Wherever the traffic flows, both railroads and ports are aiming to have the flexibility and capacity to adjust as needed.

As Port of Virginia spokesman Joe Harris puts it: "We don't care how those containers come here. We just have to be ready for them."