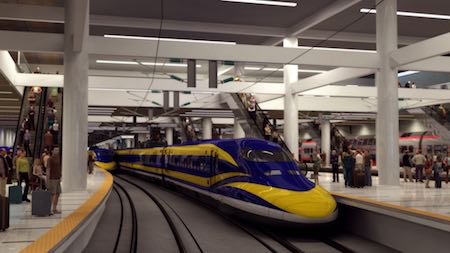 The California High-Speed Rail Authority (CHSRA) late last week released a request for qualifications for train operator services to assist with the development and management of the initial operations of the planned San Francisco-to-Los Angeles rail system.

Early engagement of a train operator represents a "critical step" that moves the program beyond planning, design and construction toward a commercial operations phase, CHSRA officials said in a press release.

"The feedback we have received from the private sector demonstrates that this is the best way to approach the program in a timely and efficient manner," said CHSRA Chief Executive Officer Jeff Morales.

The agency's 2016 business plan called for working with a train operator early on in the process to ensure its perspective is considered in the planning and design of civil works, infrastructure, rolling stock and facilities for the project.

The early train operator also will ensure that operational considerations are taken into account during the planning, design and construction phases.

Last week's action was the first of a two-part procurement process, with a request for proposals expected to be released to qualified firms in spring 2017. The goal is to have the early train operator on board in summer 2017, CHSRA officials said.

The agency has committed to recycling all steel and concrete used during construction and diverting at least 75 percent of all waste from landfills. In addition, CHSRA is taking steps to use recycled materials wherever possible.

"We are committed to delivering the high-speed rail program in a manner that sets a new standard for infrastructure delivery in California and the United States," said CHSRA Chief Executive Officer Jeff Morales.