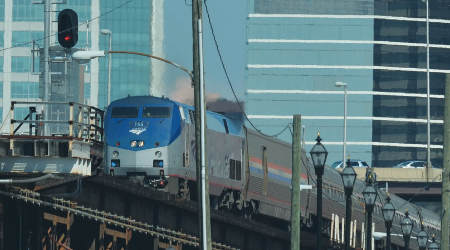 The Virginia Department of Rail and Public Transportation (DRPT) and the Federal Railroad Administration (FRA) yesterday began a series of public hearings on a draft environmental report for a proposed higher-speed rail line between Washington, D.C., and Richmond, Virginia.

The report gives an overview and comparison of alternatives under consideration, including recommendations for a preferred alternative in each corridor segment, DRPT officials said in a press release.

The first public hearing was held yesterday in Richmond. Additional meetings are scheduled for today, Oct. 11, Oct. 17, Oct. 18 and Oct. 19.

The 123-mile D.C.-to-Richmond corridor is part of the larger 500-mile Southeast High-Speed Rail Corridor that will run from the District of Columbia to Atlanta.

The preferred alternative in the environmental report calls for increasing maximum train speeds from 69 mph to 79 mph between the District of Columbia and Fredericksburg, Virginia, and to 90 mph between Fredericksburg and Richmond.