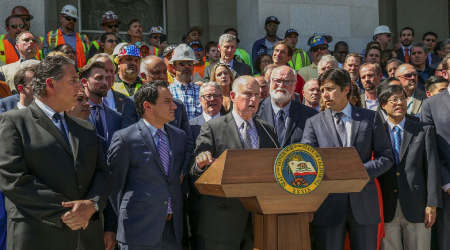 The proposed legislation would generate $5 billion annually, which would be used to fix local streets, state highways and transit infrastructure, according to a press release issued by Brown's office.

Over the next 10 years, the plan would provide $7.5 billion for public transportation improvements.

In total, the so-called Road Repair and Accountability Act of 2017 would enable California to invest $52.4 billion in transportation projects over the next decade.

California hasn't increased its gas tax in 23 years. Since then, the state's population has grown by 8 million, with millions more cars and trucks on its roads.

"California has a massive backlog of broken infrastructure that has been neglected far too long," Brown said. "Fixing the roads will not get cheaper by waiting — or ignoring the problem. This is a smart plan that will improve the quality of life in California."

The proposed law also comes with accountability provisions to ensure funds can be spent only on transportation. That includes a constitutional amendment that prohibits spending the funds on anything but transportation.

The bill is guided by principles set forth by President Ronald Reagan when he increased the federal gas tax in 1982, according to Brown's release. The plan calls for raising gasoline excise tax by 12 cents and the diesel excise tax by 20 cents.

The proposed legislation would serve as a "constant and reliable anchor for the region at a time when many of our most important institutions feel adrift, financially and otherwise," Saltzman said in a statement.

"For our riders, this means a safer, more reliable, more accessible, more equitable system: a system better equipped to accommodate a growing population in one of the most dynamic local economies in the world," she added.