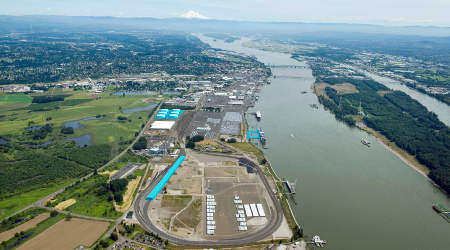 Inslee's decision followed a lengthy evaluation by the council, which voted in November 2017 to deny a permit for Tesoro Savage Petroleum Terminal LLC — also known as Vancouver Energy — to construct and operate an energy distribution terminal at the Port of Vancouver in Washington state. The terminal would have been located on the Columbia River.

Crude oil from North Dakota and Montana would have been transported by rail to the terminal. At full operation, the terminal would be capable of receiving up to 360,000 barrels per day.

Last month, the council submitted its decision to Inslee, who had 60 days to accept or reject it.

In a letter to the council, Inslee said several issues compelled his decision, including seismic risks, the inability to sufficiently mitigate oil spill risks, and the potential safety risks of a fire or explosion.

"When weighing all of the factors considered against the need for and potential benefits of the facility at this location, I believe the record reflects substantial evidence that the project does not meet the broad public interest standard necessary for the council to recommend site certification," Inslee wrote.

The governor also noted that the application was "unprecedented" in its scale and the scope of issues raised.

"While this process has demonstrated that this particular project is wrong for this particular proposed location, I am confident that our ports will continue to play an important role in regional trade, and providing opportunities for jobs in clean energy," he wrote.

Tesoro Savage has 30 days to appeal the governor's decision in Thurston County Superior Court, according to a press release issued by Inslee's office.