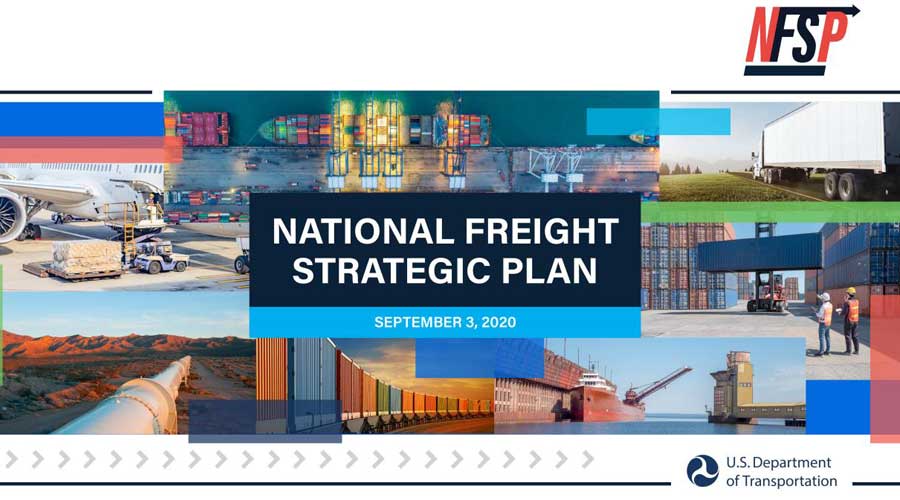 The U.S. Department of Transportation (USDOT) last week released its first-ever National Freight Strategic Plan (NFSP), which lays out a vision for long-term investments in infrastructure and other essential parts of the nation’s freight system.

Required as part of the Fixing America’s Surface Transportation (FAST) Act of 2015, the NFSP identifies major trade gateways and national freight corridors that connect major population centers, trade gateways and other major freight generators. It also assesses and suggests ways to overcome statutory, regulatory, technological, institutional, financial and other barriers to improved freight transportation; outlines a process for addressing multistate projects; and forecasts freight volumes for the next five, 10 and 20 years.

The plan will help the United States maintain its competitive edge across such major industries as agriculture, manufacturing, energy production and e-commerce, said U.S. Transportation Secretary Elaine Chao in a press release.

The NFSP aims to help improve the safety, security and resiliency of the national freight system, she said. It also supports the development of data, technologies and workforce capabilities that can improve the freight system.

The Coalition for America’s Gateways and Trade Corridors (CAGTC) applauds the USDOT for releasing the plan, which has been a longstanding policy goal for the coalition, CAGTC officials said in a statement. Coalition leaders believe infrastructure condition looms heaviest over all freight system issues.

“When infrastructure fails — whether a failure of condition or capacity — safety, efficiency, performance and security all fail,” they said. “Therefore, we look forward to the future release of the [plan’s] National Multimodal Freight Network, which will help provide a systematic structure for infrastructure investment, as called for in the FAST Act.”

CAGTC officials also believe robust federal investments are necessary to move nationally and regionally significant projects forward. The coalition has long called for a competitive grant program that selects projects through merit-based criteria that identify and prioritize investments with a demonstrable contribution to national freight efficiency.

“The information provided in the NFSP helps inform such an approach and supports the federal role in meeting this need,” CAGTC officials said. “We look forward to working with the USDOT as it continues developing tools that guide federal investment to our nation’s critical freight assets.”