Trump's infrastructure plan will be unveiled in weeks, Chao says 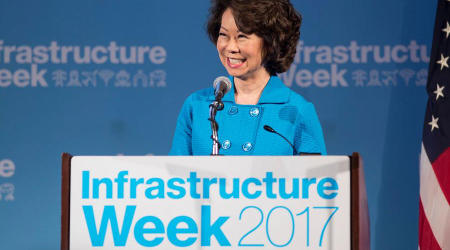 President Donald Trump's infrastructure proposal will be announced in the next several weeks, and will include $200 billion in direct federal funds to leverage $1 trillion in infrastructure investment over the next 10 years, U.S. Transportation Secretary Elaine Chao told the U.S. Chamber of Commerce yesterday.

The administration's goal will be to use federal funding "as an incentive to get projects underway and built more quickly with greater participation by state, local and private partners," Chao said in an address at the U.S. Chamber's forum to kick off "Infrastructure Week 2017."

"This approach is in line with studies that show federal spending often substitutes rather than augments state and local funding on infrastructure," she said.

Creative financing arrangements — such as those in which the government contracts with the private sector to build, operate and maintain a piece of infrastructure — will be considered, she added.

Developed with input from 16 federal departments and agencies, Trump's infrastructure plan will address the needs of urban and rural communities, the transportation secretary said.

Also, the administration's definition of infrastructure "not only recognizes traditional  infrastructure such as roads, bridges, railroads, airports, inland waterways and ports, it may also potentially include energy, water, broadband and veterans hospitals," said Chao.

Meanwhile, as part of Infrastructure Week, several transportation organizations announced events designed to raise awareness of the need to address the nation's aging infrastructure. Among them was the Railway Supply Institute (RSI).

"During Infrastructure Week and all through the year, we welcome the opportunity to work with local, state and federal governments to enhance and promote investment in rail infrastructure to continue to grow America's economy while creating and sustaining jobs," said RSI President Tom Simpson in a press release.