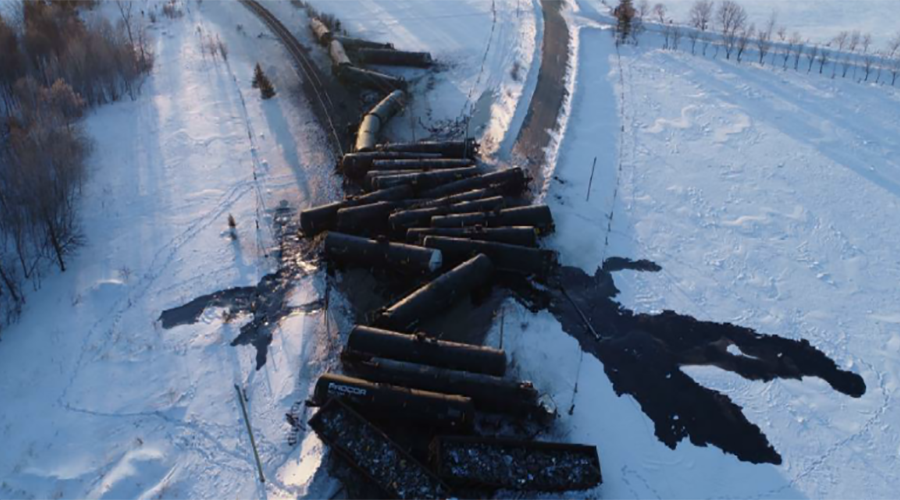 Snow and ice buildup underneath a rail led to the derailment in February of a CN crude-oil train in Emo, Ontario, according to a Transportation Safety Board of Canada (TSB) report.

The train derailed Feb. 18 on a curve as it traveled from Winnipeg to Fort Frances, Ontario, on CN's Sprague and Fort Frances subdivisions,TSB officials said in their report. The train was hauling 144 freight cars, 33 of which left the track. Some of the cars spilled crude oil.

The derailment caused no injuries. Six homes in the area were evacuated as a precaution, TSB officials said.

"Closer examination revealed that the snow and ice had built up between the underside of the rail base and the tie plate rail seats. This caused the rail to become unseated from the tie plate and left the rail susceptible to gauge spreading under the load of the train, which led to the derailment," the report states. "This is a phenomenon commonly referred to in the rail industry as 'ice jacking.'"

A combination of weather conditions and track conditions is required for ice jacking to develop. The TSB has observed the phenomenon in at least one other investigation, according to the report.

A review of the locomotive event recorder data found that the CN train was handled in accordance with regulatory and company requirements.

After CN conducted an incident investigation, the railroad clarified inspection expectations in its engineering track standards.