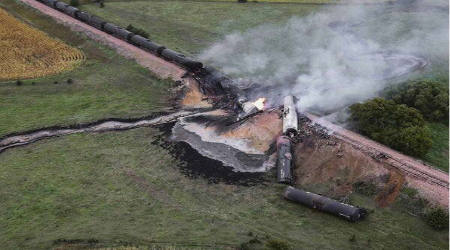 The probable cause of a BNSF Railway Co. ethanol train derailment two years ago in South Dakota was related to the railroad’s decision to defer track maintenance and continue operating high-hazard flammable unit trains on the Aberdeen subdivision, the National Transportation Safety Board (NTSB) announced last week.

The incident occurred Sept. 19, 2015, when the train derailed at a small bridge near Lesterville, S.D. The train was hauling three locomotives, 96 loaded tank cars and two hopper cars filled with sand, according to the NTSB report.

Seven cars from the head of the train derailed. Two of the derailed cars breached and released 49,743 gallons of denatured fuel ethanol that caught fire. A third car leaked ethanol from its bottom outlet valve.

No one was injured and the accident did not require an evacuation. The cost of damage was estimated at $1.1 million.

A forward-facing video from a BNSF train that traveled through the area the day before the incident showed misalignment of track in one area, NTSB investigators learned. Further audio captured an "obvious clunking" sound when the engine traversed the location, the report stated.

The board determined that the probable cause of the broken rail, derailment and fire was BNSF's decision to "defer track track maintenance and continue to operate high-hazard flammable unit trains" on the Aberdeen subdivision.

"Contributing to the accident was the Federal Railroad Administration's (FRA) track maintenance regulation that allowed high-hazard flammable unit trains to continue to operate after the track was reclassified to a lower standard," the report stated. "Contributing to the tank car breach and subsequent fire was the continued use of legacy U.S. Department of Transportation-111 tank cars to carry flammable products."

In its recommendations, the NTSB called for:
• the U.S. Pipeline and Hazardous Materials Safety Administration (PHMSA) to include the increased derailment risks associated with Class I track, the relationship between rail and rail-car weight, and potential failure of legacy DOT-11 tank cars in the federal regulatory list of items for railroads to consider when determining routes for high-hazard flammable unit trains.
• PHMSA and the FRA to work together to develop guidance for railroads when using the list to analyze proposed routes for those trains or unit trains.