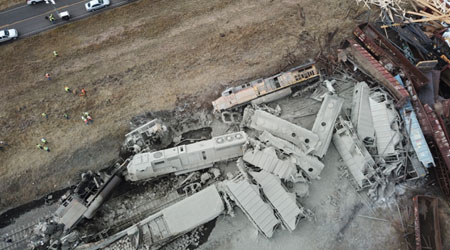 The National Transportation Safety Board (NTSB) has determined that an air brake failure caused a fatal collision between two Union Pacific Railroad trains in Granite Canyon, Wyoming, in 2018.

In a report issued yesterday, the NTSB said the Oct. 4, 2018, collision occurred when the air brakes on an eastbound UP train failed while descending a hill. An air flow restriction in the brake pipe caused the air brake system to fail, and the end-of-train device failed to respond to an emergency brake command.

Contributing to the accident was the railroad's "failure" to maintain the rail cars in accordance with federal regulations, including regularly performing single rail-car air brake tests, NTSB officials concluded. Also contributing to the incident were communication protocols, set by Federal Railroad Administration and industry standards, that allowed extended time intervals for loss of communication notification between the head-of-train device and end-of-train device without warning the train crew of the communication loss, they said.

Based on its findings, the NTSB issued four safety recommendations to the FRA, Association of American Railroads and American Short Line and Regional Railroad Association.

The NTSB's full report can be read here.