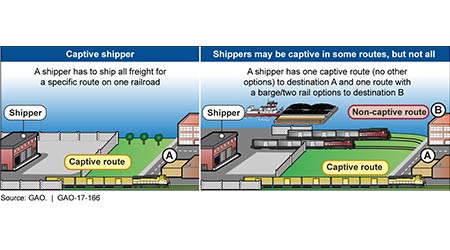 Although rail contracts and tariffs are similar, contracts offer the flexibility to customize rates and terms to a specific shipper, the U.S. Government Accountability Office (GAO) determined in a study on freight-rail pricing.

The study was prompted by some shippers' concerns with how railroads negotiate certain shipping contracts.

Railroads charge various rates for moving freight from a particular origin to a particular destination. A railroad may set the rate in a public pricing document, known as a tariff, or negotiated through a private contract with a shipper. Most freight ships under contract, according to the GAO.

In the study, the GAO found that U.S. freight railroads examine factors specific to each shipper when developing contract rates. Railroad representatives interviewed for the study said that volume commitments negotiated in a contract allow the railroads to more efficiently allocate resources and ensure consistent revenues.

Despite the volume discounts that contracts can offer, some selected shippers told the GAO that contracts that include rates for origin-to-destination routes can contain high rates on some routes.

This is particularly an issue for shippers that are "captive" — that is, shippers served by a single railroad without an economically viable transportation alternative, the GAO reported in its study highlights.

Representatives of the four largest freight railroads said they charge what shippers are willing to pay to cover infrastructure costs for the entire rail network. But shippers subject to contract rates they view as unreasonable cannot challenge those rates at the Surface Transportation Board because contracts are not subject to the board's oversight.

To read more about the GAO's findings, click here to see the full report.