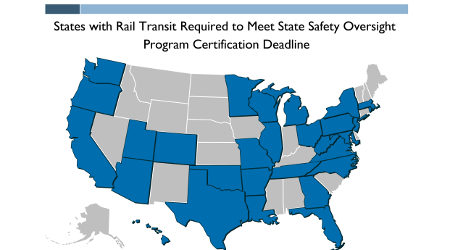 The Federal Transit Administration (FTA) has notified 30 states where transit-rail systems operate that they must establish a State Safety Oversight (SSO) program by April 15, 2019.

Currently, nine states have yet to enact legislation prior to FTA certification. By law, the April 2019 deadline cannot be waived or extended, according to FTA Executive Director Matthew Welbes.

"The affected states should act to establish an FTA-certified SSO program that is compliant with federal law and provides the highest level of safety for their rail-transit riders and workers," he said.