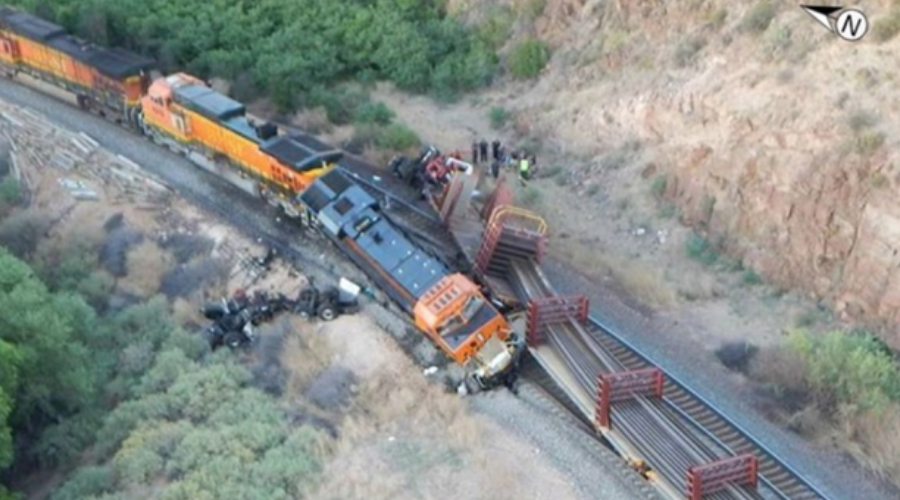 The National Transportation Safety Board (NTSB) determined yesterday that the failure of a BNSF Railway Co. train crew to operate an intermodal train within restricted-speed requirements caused a fatal collision between the intermodal train and a BNSF work train near Kingman, Arizona, in June 2018.

The collision occurred when a westbound BNSF intermodal train, operating in centralized traffic-control territory, collided with the rear of a slow-moving eastbound work train. The work train was moving in reverse to drop off an employee before traveling west to exit the main track. One employee was killed, and another was seriously injured.

In Railroad Accident Report 21/01, NTSB investigators noted the crewmembers of the intermodal train operated at a speed that did not allow their train to stop within half the range of vision as required. The NTSB concluded the current training and oversight by railroad supervisors are ineffective in ensuring the operating crew’s use of restricted speed, NTSB officials said in a press release.

Federal Railroad Administration (FRA) regulations require roadway workers who lay track to use a form of on-track safety. However, FRA’s interpretation of its regulation allows railway workers on work trains to lay track without using a form of on-track safety, and this interpretation contributed to the cause of the collision, according to the NTSB’s report.

"It is extremely important the railroad industry is in full compliance with established federal regulations," said Robert Hall, director of the NTSB’s Office of Railroad, Pipeline and Hazardous Materials Investigations. "There is no room for misinterpretation of the requirements as this tragic accident demonstrates. Regulations designed to protect railroad workers must be clear to avoid any ambiguity and eliminate risks."