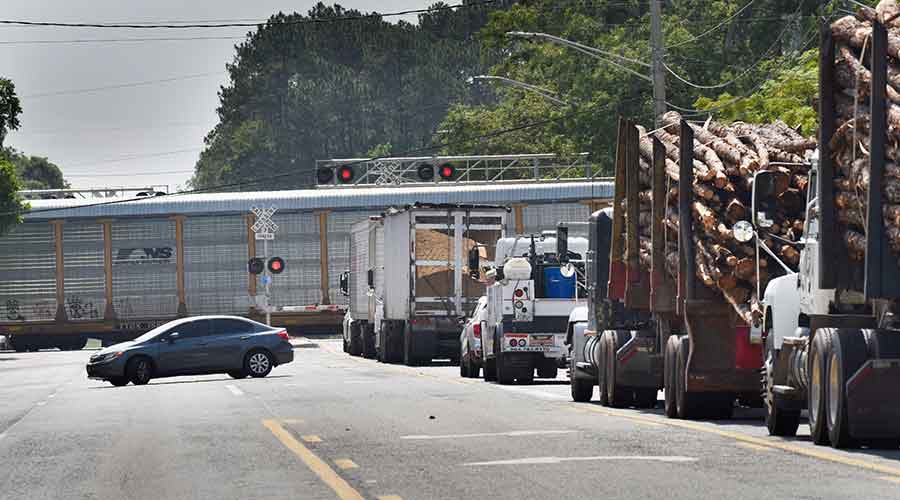 The Florida Department of Transportation will receive a $17 million Consolidated Rail Infrastructure and Safety Improvements (CRISI) program grant from the Federal Railroad Administration (FRA) to improve safety at seven grade crossings in Jacksonville.

The $35.2 million project also involves CSX, Florida East Coast Railway and the Jacksonville Transportation Authority (JTA). The partners aim to address conflicts between freight trains and vehicular, pedestrian and bicycle traffic at major arteries in downtown Jacksonville, including the heavily used San Marco Boulevard interchange. Crossing delays can last from several minutes to several hours due to the lack of appropriate storage track, communications and signaling, and switching infrastructure in the area, the project partners said.

The project calls for upgrading switches, adding track and implementing technologies. Slated to start in 2020 and conclude in 2021, the work will address three components of the area's rail system: FEC's corridor between its Bowden yard and the St. Johns River rail bridge, the Beaver Street interlocking and the southern end of CSX's yard north of downtown.

"We strongly believe these improvements to busy railroad interchanges near the urban core will enhance safety and mobility in Jacksonville and throughout the state of Florida,” said JTA Chief Executive Officer Nathaniel Ford Sr. in a prepared statement.

Meanwhile, the FRA also awarded a $19.2 million CRISI grant to the Chicago Region Environmental and Transportation Efficiency (CREATE) program for the Dolton Junction Interlocking project in Dolton and Riverdale, Illinois.

Known as CREATE project WA11, the work calls for upgrading and reconfiguring the line connections, including the replacement of a Norfolk Southern Railway connection between the CSX and IHB lines. In addition, crews will construct a third mainline with direct access from CSX and Barr Yard to the UP mainline; build crossovers between two IHB mainlines; upgrade connections between IHB and UP; and add remote control to automate Dolton Tower.

The FRA also awarded an $8.7 million CRISI grant to the Michigan Department of Transportation and Lake State Railway Co. (LSRC) for infrastructure improvements in the short line’s Mackinaw Subdivision. The railroad operates about 375 miles of track in the state.

“Investments made with this grant along with money contributed by the state of Michigan and [us] will help the growing industrial and agricultural base located along the line,” said LSRC President and CEO John Rickoff in a press release.

Overall, the FRA has issued fiscal-year 2018 CRISI grants totaling more than $326 million. Recipients also include rail projects in Arkansas and Missouri, Indiana and the Southeast.