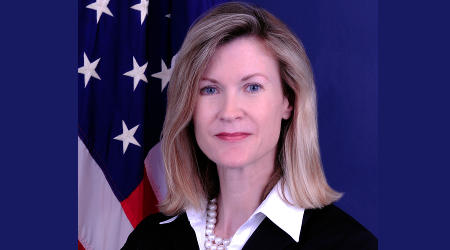 President Donald Trump has appointed Ann Begeman acting chairman of the Surface Transportation Board (STB), the board announced yesterday.

Last month, Obama nominated Begeman to her second five-year term as an STB board member. The U.S. Senate confirmed her unanimously on Dec. 9. She joined the board in 2011; her current term expires Dec. 31, 2020.

"I look forward to continuing the important mission of the STB in my new capacity as acting chairman, working with the new administration, my fellow board members, Daniel Elliott and Deb Miller, our dedicated agency staff, and our important stakeholders," Begeman said in a press release issued by the STB.

In her statement, Begeman also recognized Elliott "for his service and leadership, and his sincere efforts to facilitate a smooth transition during the change in administrations."

Prior to joining the board in 2011, Begeman held staff positions on Capitol Hill for more than 20 years. She played a key role in the crafting of major transportation legislation including the ICC Termination Act, which created the STB.

In a prepared statement issued yesterday, Association of American Railroads (AAR) President and Chief Executive Officer Edward Hamberger congratulated Begeman on her appointment, and called on her to "continue to heed our request to pause all major rulemaking — mostly its misguided forced access proposal — until the board is equipped with five full-time board members."

The STB Reauthorization Act of 2015 increased the board from three to five members. The two additional positions remained open during Obama's presidency.