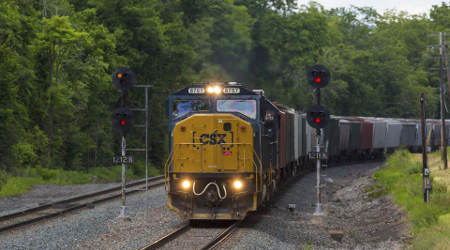 The New York State Department of Transportation (NYSDOT) has awarded $19 million in state funding toward a CSX rail-yard expansion in the town of DeWitt in central New York.

The project will create central New York's first inland port, which will allow for containerized freight to be moved between the Port of New York and New Jersey (PANYNJ) and CSX's DeWitt terminal, NYSDOT officials said yesterday in a press release.

The reduced shipping costs and environmental benefits of transportation by rail will make regional exports such as agricultural products, metals and wood to Asia and other international destinations more competitive, they said.

State officials hope the rail project will reduce the cost of transporting freight between the port and central New York by $500 per container. Currently, nearly 80 percent of all freight in the state moves by truck.

"With the completion of projects by the Port Authority of New York and New Jersey to enhance shipping and freight capacity, New York State is now positioned to accept some of the world's largest container ships," said NYSDOT Acting Commissioner Paul Karas. "Gov. Cuomo's support of the new Central New York containerized handling facility will reduce shipping costs and make the region's exports more economically competitive both nationally and internationally."

A contract between the state and CSX calls for the railroad to complete the project in 18 months. NYSDOT officials hope the inland port will be operational by the end of 2019, according to the Syracuse Post Standard.

Under the arrangement, state officials may agree to increase financial support of the project to $21 million, the newspaper reported.

"CSX appreciates the opportunity to partner with the State of New York on this intermodal project that will leverage the environmental and public benefits of rail to enhance connectivity between the PANYNJ and Upstate New York," said CSX Vice President of Intermodal Dean Piacente. "The state's investment in this project will allow CSX to increase the capacity of our Dewitt terminal near Syracuse to support international intermodal service, creating a distinct competitive advantage for the state and expanding market access for the region's businesses and consumers."