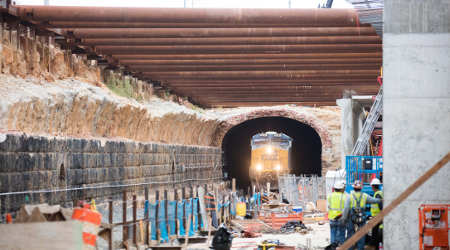 The $250 million, 42-month project calls for replacing a 3,800-foot, single-track tunnel built beneath Virginia Avenue in southeast Washington more than a century ago with two larger one-track tunnels to accommodate double-stack trains. Work began in May 2015 and the first of two planned phases was completed in late 2016.

Originally constructed in 1872 by the Baltimore and Potomac Railroad, the tunnel was rebuilt in 1906. The 18.7-foot-tall tunnel needs to be replaced because it’s near the end of its useful life, has cracked masonry and a deteriorating drainage system, and regularly floods during heavy rains. Plus, its single track causes extensive congestion for both freight and commuter trains.

The new 4,100-foot-long, 21-foot-tall tunnels will improve the fluidity of freight and passenger trains on one of the region’s busiest rail lines; lessen the impact of freight trains on passenger-rail service by providing two-way traffic; ease highway congestion; and reduce the risk of rail service disruptions caused by flooding and other severe weather, according to CSX.

The commonwealth of Virginia provided $24 million for the project, with remaining costs to be covered by the Class I. Virginia officials opted to contribute funds because state ports could gain improved freight-rail access to interior markets and truck traffic could be reduced on interstates 81 and 95, says CSX spokesman Rob Doolittle.

In addition, eliminating the single-track bottleneck will help both Virginia Railway Express and Amtrak, which approach the District’s Union Station from the south on the same mainlines that extend through the tunnel, he says. The project’s first phase — a newly built southern tunnel with track — was completed in December 2016, a month ahead of schedule. CSX moved the first double-stack train through the structure two days before Christmas.

The entire tunnel will cap off 61 clearance projects that needed to be completed for CSX’s National Gateway, a double-stack corridor the Class I has been developing the past several years between Mid-Atlantic ports and the Midwest via an $850 million public-private partnership. The gateway provides the railroad a more efficient and environmentally friendly route for moving double-stack trains, says Chuck Gullakson, CSX’s assistant vice president-National Gateway and chief project engineer for the Virginia Avenue Tunnel reconstruction.

For example, the first train that moved through the new higher southern tunnel was able to carry more containers between Portsmouth, Va., and CSX’s large intermodal terminal in North Baltimore, Ohio.

“This tunnel was critical for us,” says Gullakson.

Now, finishing the second phase is crucial to fully garnering the reconstructed tunnel’s benefits. Construction and engineering work for the entire project is being managed by joint venture (JV) partners Clark Construction Group LLC and Parsons Transportation Group through a design-build contract.

The second phase involves demolishing the remaining sections of the existing tunnel’s roof and south wall and constructing a new 4,100-foot, cut-and-cover north tunnel; building an additional track; backfilling the trench; removing temporary bridges; and permanently relocating numerous water, sewer, electric, communications and gas utilities. Cut and cover is a construction method for shallow tunnels in which a trench is excavated and roofed over with a sturdy overhead support system.

During the project’s first phase, the JV team demolished about 300 feet of the tunnel’s south wall and roof to accommodate the new south track; built the 4,100-foot, cut-and-cover south tunnel in a trench up to 50 feet deep adjacent to the existing tunnel; and completed six temporary roadway bridges to maintain ongoing north-south vehicular and pedestrian traffic. 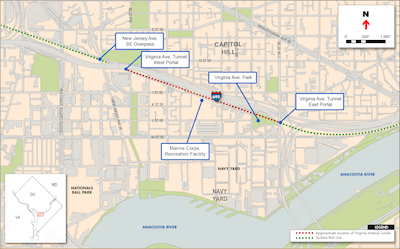 When the project’s completed in summer 2018, there will be a single two-track portal at the west end — the two tunnels will merge into one for about 300 feet due to the existing configuration of highway-bridge piers and other existing infrastructure. At the east end, the two tunnels will follow different paths to accommodate the 11th Street bridge highway piers.

The tunnels will split into two structures about 1,000 feet west of the portals. Over the remaining 2,800 feet, the two separate tunnels will share a common center wall, which will be built with steel-and-concrete pilings drilled 40 to 50 feet into the ground.

The biggest construction challenge thus far: coordinating and clearing the relocation of many utilities in a 200-year-old, densely urban environment that includes seven busy streets and hundreds of residents in a 10 city-block area, says Gullakson.

Utility relocations during the first phase involved two complex interfaces with sanitary sewers and the lowering of a combined sewer by 11 feet, says Phil Sheridan, a senior vice president for Clark Construction subsidiary Clark Civil LLC. Excavation work uncovered a surprise, as well — portions of the original tunnel that were abated, but never removed from the site, when a realignment was completed in the early 1900s, he says.

Utility work in the second phase will be less onerous, involving six instead of 23 relocations, says Sheridan. “But we will need to build larger temporary road bridges,” he says.

The JV team also will need to continue performing work without interrupting CSX’s operations. About 20 freight trains travel through the tunnel daily, plus there are train operations adjacent to it. So, crews must perform tasks in between trains, says Sheridan. The first tunnel was built parallel to the old tunnel so trains weren’t disrupted.

Phase two likely will conclude two-and-a-half months ahead of schedule, says Sheridan. As of last month — the 21st month in the 42-month schedule — major tunnel demolition work was slated to start at February’s end and concrete work in the second tunnel was pegged to begin in April.

A lot of material already has been moved and many tasks have been accomplished during the project’s first half. As of Jan. 1, 20,900 truckloads of dirt had been excavated, 50,000 cubic yards of concrete had been poured and 1,913 of a required 2,250 pilings had been drilled.

After the tunnels are finished, the JV team will need to complete restoration and other related work. CSX agreed to provide the following post-project neighborhood enhancements: improvements to Garfield Park; enhancements to Virginia Avenue Park, including a new dog park; a straightened alignment of Virginia Avenue SE; improved street lighting; and new green space and landscaping, with additional trees, brick sidewalks and granite curbs.

Need to be a good neighbor

The Class I has tried to mind residents’ concerns during construction, says Gullakson. The railroad has monitored air, noise and vibrations, logging a total of 11,312 hours for those activities as of Jan. 1. In addition, the JV team has employed a closed-trench method during tunnel construction to improve safety, implemented measures to control dust and tried to limit work hours. Pilings are being drilled instead of driven to reduce vibration, says Gullakson.

In addition, since the project’s initial stages, a community office has been open to deal with local issues and the railroad has been in constant contact with residents via emails, text messages, phone calls and alerts hung on front doors, he says. As of Jan. 1, CSX had logged nearly 79,000 such contacts with locals.

“We want to be the best neighbor for the community,” says Gullakson. “We try to be proactive.”

CSX also has tried to employ a take-charge approach to ensuring there’s enough capacity to meet its traffic-growth goals. The new double-stack-height Virginia Avenue Tunnel should play a key role in accommodating higher intermodal flows along the National Gateway come mid-2018 and beyond, Gullakson believes.

“The tunnel will be built according to our traffic needs,” he says.