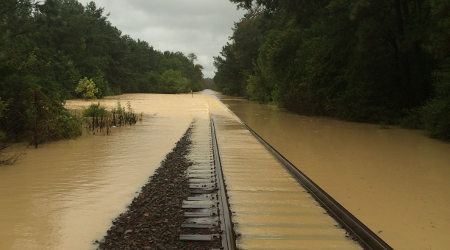 BNSF Railway Co. and Union Pacific Railroad provided updates on the status of their operations in the Gulf Coast area, as flooding in Houston and parts of southeastern Texas continued in the aftermath of Hurricane Harvey.

Several BNSF subdivisions remain out of service due to multiple washouts and high water. As a result, all traffic destined to or originating from Houston — as well as traffic scheduled to route through the area — remains suspended, according to a BNSF announcement.

Rail lines with BNSF trackage rights are also out of service. BNSF crews began conducting inspections and repair work yesterday in some locations.

"Given the size and scope of this historic flooding, normal train flows in the area are not likely to resume for an extended period," BNSF officials said.

UP officials said yesterday that the company's rail operations along the Gulf Coast from Brownsville, Texas, to Lake Charles, Louisiana, are suspended due to high water and storm damage.

"As weather and access to storm damaged areas allows, we are inspecting and repairing track, bridges and signals to return to service as quickly and safely as possible," according to a UP customer service announcement.

UP routes through San Antonio, Texas, are opening up, which will enable the Class I to operate trains north and south between San Antonio and Hearne, Texas. The Laredo Gateway remains open to interchange traffic with Mexican railroads, UP officials said.

Additionally, the Livonia and Avondale shipments on their way to points west of Tucson, Arizona, and into California that normally travel through Houston will be re-routed through Longview and Forth Worth, Texas, around the flooded areas, they said.

Meanwhile, the Port of Houston announced that all of its facilities will remain closed today. Officials are monitoring when operations can safely resume, according to a post on the port's website.