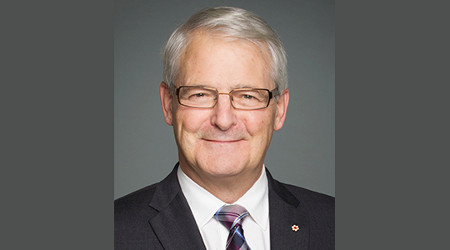 Canada's Minister of Transport Marc Garneau late last week ordered all railroads to use handbrakes when trains are stopped on a mountain grade after an emergency use of air brakes.

Garneau's order stems from the Transportation Safety Board of Canada's (TSB) investigation into the fatal Feb. 4 derailment of a Canadian Pacific train near Field, British Columbia.

Garneau said he appointed a minister's observer to keep him apprised of the TSB's accident investigation.

"As a precaution until such time that the exact cause of the accident is determined, my department has issued a ministerial order under the Railway Safety Act to all railway companies mandating the use of handbrakes should a train be stopped on a mountain grade after an emergency use of the air brakes," said Garneau in a press release.

The order will remain in effect as long as necessary, he added.

Last week's derailment, which occurred between the Upper and Lower Spiral Tunnel, resulted in the deaths of the train's three crew members. They were identified as conductor Dylan Paradis, engineer Andrew Dockrell and trainee Daniel Waldenberger-Bulmer.

Prior to the accident, the train had been stopped with the air brakes applied in emergency at Partridge, the last station located ahead of the entrance to the Urban Spiral Tunnel. A change-off of the crew took place, but the second crew was not yet ready to depart.

The train had been stopped on the grade, with the air brakes in emergency for about two hours when the train started to move. There were no handbrakes applied on the train, which began to accelerate to a speed in excess of the maximum track speed of 20 mph for the tight curves and steep mountain grade. The train then derailed.

Meanwhile, CP announced Feb. 8 that it had re-opened its mainline through Field after completing all necessary safety checks in collaboration with Transport Canada. While the derailment investigation continues, the Class I has taken steps to supplement its existing safety protocols for trains on mountain grades across its network, and will fully comply with Garneau's order for train securement, CP officials said in a press release.

In concert with Park Canada and other agencies, CP crews and contractors are working to remove the damaged rail cars and equipment from the derailment site, they added.

"The CP team has been in close contact with the [deceased crew members'] families and is providing both immediate and long-term support to them during this difficult time," said President and Chief Executive Officer Keith Creel. "We are also providing assistance and support to our employees across Canada and the U.S."