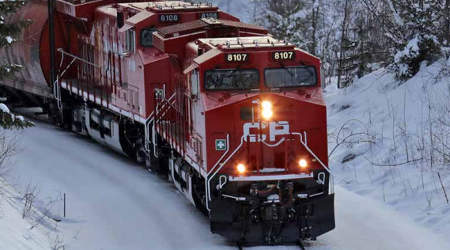 Canadian Pacific has broken its record for the shipment of grain, moving 2.64 million metric tons (MMT) of Canadian grain and grain products in October, the Class I announced today.

Through 14 weeks of the 2018-19 crop year, CP shipped 7.5 MMT of grain and grain products. Since harvest began in September, CP has averaged sending more than 5,500 empty rail cars to country elevators each week.

"This accomplishment is a testament to the hard work and dedication of our operating team and the power of our operating model," said Joan Hardy, CP's vice-president sales and marketing–grain and fertilizer. "This requires laser-sharp focus on the supply chain details, and close collaboration with customers, elevators and ports.

The supply chain has overcome challenging conditions across the prairies, including an early blast of winter weather in October that caused significant harvest delays and resulted in some grain pipeline congestion, said CP officials. They reiterated the need for 24/7 operations through the entire supply chain to prevent further congestion.

CP is meeting its dedicated train program (DTP) commitments and is receiving "positive feedback" from its customers, CP officials said. Under DTP, customers are incentivized to load and unload more quickly, driving increased overall grain movements and benefitting the economy, they added.

To help increase efficiency, CP invested in new hopper cars, with 500 expected to be delivered by year's end. The new cars carry more grain per car, allowing for faster loading and unloading, as well as less maintenance.

In preparation for winter, the Class I is deploying resources and assets, and is in the final stages of adding employees and locomotives to meet customers' requirements across North America. The railroad also published a white paper titled "Railroading in the Canadian Winter."