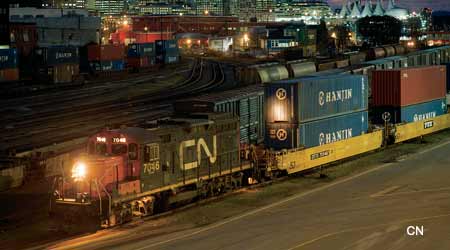 When CN Executive Vice President and Chief Financial Officer Luc Jobin addressed a crowd of investors at last month’s Citi Industrials Conference in Boston, he was frank about challenges the railroad has faced over the past several months. As CN grappled with setbacks in the energy and grain markets, the Class I carried out a series of second-quarter layoffs — to the tune of around 600 conductors — and parked slightly more than 200 locomotives, he said.

“We had to make some significant adjustments … in terms of the assets that we are deploying,” Jobin told attendees at the Sept. 16 conference.

And indeed, CN’s second-quarter financial performance told a similar story: Although its Q2 adjusted earnings per share of $1.15 bested analysts’ forecasts by 10 cents, the railroad reported flat year-over-year revenue at $3.125 million, along with a 26 percent drop in coal revenue, which plummeted to $148 million. (All figures in Canadian dollars).

In spite of those headwinds, Jobin and other execs remain optimistic about at least one of the railroad’s major business segments.

“Intermodal continues to be a very strong engine of growth. Certainly our overseas business continues to do very well,” said Jobin, who stepped in to oversee CN’s senior leadership team following President and Chief Executive Officer Claude Mongeau’s medical-related leave in August. “We’ve been growing that part of our franchise steadily.”

Traffic originating overseas accounted for 31 percent of CN’s total revenue in first-half 2015, second only to trans-border traffic between Canada and the United States, which made up 34 percent of the railroad’s revenue during the same period, according to CN spokesman Mark Hallman.

“Longer-term, the ocean ports that we serve on the three coasts of the continent are in very good shape,” Mongeau told investors during a July 20 second-quarter earnings call. He went on to highlight how several key terminal projects will help bolster the railroad’s “international franchise” — a segment that CN execs are expecting to spur revenue and traffic growth now and in the future.

While traffic in some commodities — such as coal, metals, and grain and fertilizers — declined or remained relatively flat in the second quarter, international intermodal volume jumped 10 percent.

A link in the chain

Intermodal has been a boon for most North American railroads during the past year, as Association of American Railroads’ (AAR) weekly traffic reports have shown. In August, U.S. railroads registered a 3.6 percent increase in container traffic, even as carload traffic fell 4.6 percent, according to AAR figures.

With a close eye on shifting patterns in the global supply chain, CN execs have been working to forge partnerships with port authorities and terminal operators to identify where and how to tap into these trends. By establishing such relationships, the railroad’s leaders hope to attract new businesses and provide a competitive option for shippers.

“Excellent train service in and of itself is no longer sufficient to effectively compete in the world of intermodal,” says CN Executive Vice President and Chief Marketing Officer JJ Ruest. “We’re just a piece of the chain.”

On June 15, CN announced that it had signed a memorandum of understanding (MOU) with the Alabama State Port Authority (ASPA), which owns public terminals at the Port of Mobile.

CN is counting on the agreement to help exploit any new container traffic resulting from the $5.2 billion Panama Canal expansion project, which is slated for completion in April 2016. The pact also should enable the Class I to capitalize on the Port of Mobile’s planned $32 million intermodal rail facility, which is designed to divert some truck traffic to rail, Lyons says. Currently, trucks move all cargo through the port.

APM Terminals Mobile LLC, operator of a 95-acre, deep-sea container terminal at the port, also was a signatory to the agreement.

While the port authority has held talks with other railroads about serving the facility, CN is the only one so far to enter into a supply chain agreement, Lyons says.

Construction of the facility is expected to wrap up by spring 2016.

Equipped with post-Panamax cranes, the Port of Mobile is poised to handle larger ships coming in from Asia. But the new rail facility, coupled with the MOU, will help increase overall throughput capabilities, Lyons says.

Tapping into the third coast

Two days after unveiling the Port of Mobile agreement, CN announced the terms of a similar MOU with the Port of New Orleans.

Like the agreement in Alabama, the New Orleans pact is intended to help the port take advantage of increased Panama Canal trade between Asia and North America, as well as between North and South America.

“We and our Port of New Orleans gateway partners have a mutual interest in ensuring the competitive and efficient movement of container goods through the gateway and growing its market share,” Ruest said in a press release. “This MOU will help us advance that agenda.”

The agreement centralizes all traffic data on a scorecard, says Robert Landry, the port’s chief commercial officer. Issued weekly, the scorecard helps the port and its vendors determine where cargo delays are occurring and how to mitigate them.

This means greater supply chain efficiency at the port, which, in turn, may draw in new business, CN officials believe.

In addition to helping CN and the port take on increased Panama Canal traffic, the agreement is aimed at streamlining operations ahead of the opening of the $25.1 million Mississippi River Intermodal Terminal. Slated for completion in first-quarter 2016, the yard will provide on-dock access for CN, which is currently the only railroad that offers rail intermodal service at the New Orleans port, according to Ruest.

“As volumes continue to grow, we’re going to need greater access,” Landry adds. “We’re putting a lot of money into the rail corridor because we think more and more of our customers will take advantage of it.”

A history of collaboration

These kinds of agreements are nothing new for CN. Five years ago, the Class I signed a level of service agreement with GCT Global Container Terminals Inc., which operates a terminal at Port Metro Vancouver in British Columbia.

As part of the agreement, the entities agreed to meet daily to discuss any operational issues. CN and GCT also agreed to carry out ongoing long-range planning to discuss strategy, including winter response efforts, says Eric Waltz, president of GCT Canada.

“More than ever, it is important to ensure we continue to move our customers’ volumes through quickly,” he says.

That will be key as GCT kicks off its Deltaport Intermodal Yard Reconfiguration project, which will increase the yard’s capacity by 1.9 million 20-foot equivalent units, or more than 50 percent, by 2017. GCT officials expect the project to spur $900 million in economic development in British Columbia and Canada — as well as more potential business for CN.

On the other end of the continent, CN had been working on a similar plan with the Port of Halifax in Nova Scotia. In 2010, the Halifax Port Authority and CN entered a level of service agreement that set performance metrics aimed at increasing efficiency.

As part of the pact, the entities agreed that 90 percent of eligible import containers would be loaded and released to CN by the terminal operator within 72 hours. Additionally, 90 percent of loaded import containers were to be delivered to Montreal, Toronto and Chicago within predetermined time slots, according to a document issued by the port authority.

Since signing that agreement, the port has experienced a drop in dwell times, along with improved rail-car availability, says Halifax Port Authority Vice President of Business Development and Operations George Malec.

And ratcheting up these service levels can help CN tap into the port’s robust Asian trade and any increased traffic stemming from the recent expansion of the Suez Canal, Ruest says.

Currently, about 45 percent of the port’s containerized cargo throughput is shipped from Asia, with 43 percent coming in from Europe.

“When you come from the southern part of Asia, the Suez Canal is probably as attractive — if not more attractive — than the Panama Canal,” Ruest says. “Halifax is the first port on the way back.”

Still, CN remains focused on maintaining adequate service levels at all the ports it serves to stay on top of the global market’s ebb and flow.

“We’re refining our service in the West Coast to try to minimize loss to the Panama Canal,” Ruest adds. “At the same time we’re refining new and improved service out of New Orleans and Mobile so that we can capitalize and get some of that diversion business.”

Shortly after signing memoranda of understanding with the ports in Alabama and Louisiana, CN in June held a financial analysts’ conference dedicated to intermodal operations — a move that transportation analyst and Progressive Railroading columnist Tony Hatch described as “rare” for the railroad.

During the conference, CN execs provided an overview of the railroad’s plans to grow the segment. They highlighted, for example, how these recent agreements will help leverage any new business resulting from the Panama Canal expansion.

At a time of flat or decreasing volumes across many commodities shipped by rail — including crude oil and coal — the conference exemplified CN’s knack for “thinking outside the box,” Hatch believes.

“These guys were really smart to do this,” he says.

For CN execs, who’ve been thinking globally for a while now, it’s all part of what it means to take their rail service to the next level.

“We’ve really put our efforts on reliable supply chain service, which in our view is the new competitive edge,” CN’s Ruest says. “Success doesn’t come by going at it alone.”