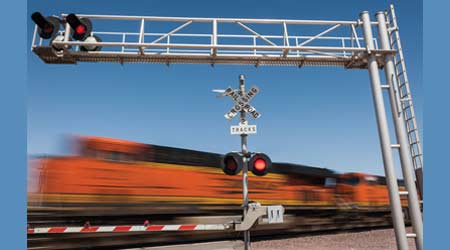 From 2010 to 2014, an average of 2,100 accidents per year have occurred at highway-rail crossings, with most of them involving collisions between a train and a motor vehicle. On average, 250 people per year were killed in such incidents during that period.

As a result, the FRA, state departments of transportation (DOTs), local municipalities, railroads and Operation Lifesaver Inc. (OLI) chapters continue to work on reducing the number of interactions between trains, motor vehicles and pedestrians.

To further reduce accidents and fatalities, the FRA in 2015 launched a campaign to encourage state DOTs, railroads and other stakeholders to take actions aimed at improving safety at the nation’s 200,000-plus crossings. As part of that initiative, the agency published in May 2017 an in-depth analysis of the factors behind crossing accidents that result in injuries or fatalities, with the hope that such information can be used to prioritize those in need of upgrades, separation or closing. The report’s research team used the FRA’s accident database to evaluate accidents that occurred from 2005 to 2014.

Among their findings, the researchers learned:
• rail and highway traffic volumes have the largest influence on accidents;
• train speed has a significant effect on the injury and fatality rate of vehicle drivers;
• a higher volume of main tracks and highway lanes leads to more accidents;
• having a highway intersection near a crossing nearly doubles the risk for accidents;
• having a crossing angle less than 30 degrees with respect to the tracks increases the accident risk by nearly 50 percent; and
• active warning devices are more effective deterrents than passive warning devices.

Demographics, community affluence, time of day and day of week also influence crossing accidents, according to the report.

So do driver distractions, says Libby Rector Snipe, a spokesperson for OLI.

"We think the [increase in fatalities] is in large part due to distraction in the vehicle," she says. "When you look at the FRA data, you can extrapolate that it's not just the moving train that’s an issue, it's that a vehicle hits the train — which could suggest the vehicle driver was so unaware of their surroundings that they couldn’t see the train was near the crossing.”

While OLI and its state chapters help deliver the crossing safety message to the public, state DOTs and local municipalities coordinate with railroads to identify candidates for repairs, improvements, separations or closures.

For example, Union Pacific Railroad works with roadway authorities to allow improvements to be made on roads located on the Class I's property. Although some projects may appear simple, the amount of coordination between the local agency and UP can take months to get to construction, UP officials note in a post on the railroad’s website. Such coordination is required when working on railroad right of way, even when the agency involved has a roadway easement/right of way.

Any roadway construction projects — including overpasses — that could affect UP rights of way must be evaluated by the railroad first to "ensure the safety of the public and railroad employees," as well as maintain rail service to its customers. The government or business entity that wants to pursue the project will enter a preliminary engineering agreement with the railroad for approval of it. If approved, UP will work with the entity to develop the project's final plans and cost estimates. The agreement provides for the railroad to be reimbursed for costs associated with the project.

UP’s rail safety programs contributed to a 5 percent decline in vehicle-train collisions at crossings in the first half of 2017 compared with the same period in 2016, according to the Class I. UP reported a 2.27 crossing accident rate across its 23-state network in 2017, down from a 2.40 rate in the first half of the previous year. The rate is calculated by the number of FRA reportable crossing accidents per million train miles.

"One of the primary purposes of Union Pacific's safety programs is to reduce railroad crossing accidents and it is encouraging to see positive results," said Cameron Scott, UP executive vice president and chief operating officer, in a press release. "Communities play a big role in helping their friends, neighbors and family members stay safe around around railroad tracks. We will continue working with local authorities to share our safety message and educate drivers."

Through UP's Crossing Assessment Process (CAP), the railroad studies crossing characteristics and focuses its efforts where incidents may be more likely to occur. The program helps identify safety enhancements that may require working with communities to add signage or pavement markings. When it comes to private crossings, the railroad works with landowners to find alternative access points that don’t cross its lines.

In some cases, railroads will contribute funds toward completion of a crossing project or separation, according to the Public Utilities Commission of Ohio (PUCO) and its rail division.

The commission is responsible for evaluating Ohio’s public crossings to determine the need for installing active warning devices.

Projects that don't qualify for federal dollars can be considered under the state-funded Grade Crossing Upgrade Program, which allows the cost to be shared between the local government, the state and railroad involved. A local municipality can expect to pay from 25 percent to 65 percent of a project’s cost, depending on factors such as the amount of daily train and motor vehicle traffic.

Moreover, Ohio public crossing projects may qualify for financial assistance through the State Grade Crossing Safety Fund. Local governments may apply for grants up to $5,000 to increase safety during a grade crossing improvement project. For example, a city government could apply for a grant to pay for rumble strips, illumination or improved signage at a project location.

Ohio is home to 36 freight railroads that operate thousands of trains in the state every day on 5,300 miles of track and through 5,721 public crossings. Since PUCO began implementing these evaluations in 1990, the annual number of train-motor vehicle crashes at crossings in Ohio has declined by 80 percent, while the number of fatalities has dropped by 92 percent. The decrease occurred even as rail and motor vehicle traffic rose during that period.

Over the past 15 years, PUCO has approved 3,300 safety upgrades at Ohio crossings, with more than 90 of those upgrades approved in 2016.

"The number of fatalities fluctuates every year, but since we started our grade-crossing improvement program in 1990, we went from having fatalities in the double-digits to having below 10 a year," says Randall Schumacher, chief of PUCO's rail division.

In 2016, there were 64 crashes at crossings in Ohio. Of those, six involved fatalities.

Railroad and state transportation officials agree that the best way to improve crossing safety is to close a crossing. So, when the FRA set a goal in 1991 to close 25 percent of the nation’s crossings, PUCO officials got on board with the plan. Since then, the state has closed 18 percent of Ohio’s public crossings.

One example: a corridor project completed last year on the Chicago, Ft. Wayne & Eastern Railway in Van Wert. City officials worked with the railroad, PUCO and ORDC to close five crossings on the line, which is used to receive crude-oil shipments via Norfolk Southern Railway. The project, which qualified for $1.4 million in federal and state funds, also called for upgrading warning devices at seven crossings and replacing surfaces at nine others, PUCO spokesman Matt Schilling said in an email.

Closing a high-risk crossing in Minnesota

Meanwhile, the Minnesota Department of Transportation (MnDOT) and BNSF Railway Co. closed a high-safety-risk crossing at Hastings Avenue and First Street in the city of St. Paul Park in October 2016. Located near an oil refinery, the crossing was in an industrial area with a highly populated neighborhood about a half-mile away. BNSF operates up to 50 trains a day on the line, which Amtrak also uses.

In June 2015, an oil train and a semi-truck collided at the crossing, which prompted Minnesota Gov. Mark Dayton to call for it to be closed.

"Each year, MnDOT works to improve safety at highway-rail crossings with gates or other improvements. This was one of those instances where closure was the best public safety choice," said Jim Weatherhead, state program coordinator for rail safety projects, in a press release announcing the closure.

MnDOT worked with St. Paul Park and Newport city officials to close the crossing and upgrade an existing road to divert traffic to a nearby overpass. The $954,000 project included removing the road and constructing a cul-de-sac for traffic turnaround.

Funding for the project came primarily from a state legislative appropriation designated for crossing safety improvements along rail routes for trains carrying oil or other hazardous materials. BNSF contributed $100,000, as well as equipment and crews to work on crossing removal and landscape restoration.

Seeking alternatives for an Anoka crossing

Another complex project in the works at MnDOT: the proposed construction of a bridge over BNSF tracks to separate an existing crossing on Ferry Street/Highway 47 in Anoka, Minnesota. A MnDOT feasibility report identified the crossing as the state’s worst for safety due to several factors, including a high volume of trains (up to 80 crossings per day), cars and heavy trucks. Northstar commuter railroad tracks are nearby, as are pedestrian paths that lead to recreational areas. Frequent trains passing through the crossing also cause traffic delays and backups for motorists.

After the 10-month feasibility study, MnDOT concluded that the preferred alternative was to build a multispan bridge over the crossing. The structure would include two travel lanes with a multi-use trail on one side, and would allow for construction of an additional two lanes if Highway 47 is expanded in the future, MnDOT officials said in a press release.

"Our goal for 2018 is to identify a preferred concept for the alignment of Highway 47 and for the bridge design," he says, adding that the search is on for potential funding options for the project, estimated to cost $17 million to $21 million.

Potential funding sources include various federal grants, state rail-safety improvement dollars and a bonding request to the state Legislature. Also, BNSF has agreed to contribute about 5 percent to cover the cost of the bridge, says Weatherhead.

While state rail-safety officials say they’re proud of the success of their crossing improvement programs, they remain frustrated over the habit of some motorists who ignore flashing lights and lowered crossing gates. In Ohio, 75 percent of crashes in 2016 occurred at crossings with active warning devices, according to the state’s Rail Crossing Statistics Report. In those cases, drivers failed to stop, drove around the gates or stopped or stalled on the tracks.

"People are in such a hurry these days," says OLI's Snipe. "We can see from the [accident] statistics that people try driving around the gate. In some cases, where there are multiple tracks, we’ve heard reports of motorists driving through the gate after one train passes and they don't realize another train is coming on the second track."

To address the problem, OLI has developed a new crossing safety video aimed at students enrolled in driver education programs. The video — which will be launched early this year — will target 15- to 18-year-olds, Snipe says.

"We're excited about this video project," she says. "If drivers become aware of rail-safety laws while preparing for their driver's licenses, we hope they will establish good safety habits early on and maintain them for their entire lives as drivers."