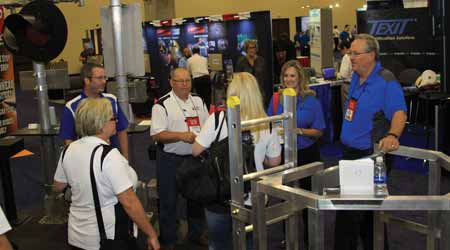 Networking, note-comparing and learning opportunities presented themselves in every aisle at RSSI's 56th communications and signaling exhibition in late June.
Photo: RSSI

On June 29 and 30, the Railway Systems Suppliers Inc. (RSSI) held its 56th communications and signaling (C&S) exhibition at the sprawling Gaylord Texan Resort in Grapevine, Texas. More than 1,550 freight and passenger railroaders, supply company representatives and guests were in attendance, according to RSSI, which represents more than 260 member companies.

On the morning of the 29th, Railroad Controls Ltd. President/RSSI President Michael Choat — decked out in a conductor’s hat and coat — cut the ribbon and officially opened the event. The exhibition comprised 193 booths, four charging stations, a cyber café and three food courts at which breakfast, lunch and afternoon receptions were available to all attendees. The meals-in-the-hall feature has been an RSSI staple for the past 15 years.

“With the food courts located on the exhibition floor offering all meals and refreshments during exhibition hours, there is no reason for customers or exhibitors to leave the exhibit hall — thereby maximizing the time for the customers to spend with the exhibitors,” RSSI officials noted in a post-event statement.

If conversations I had with attendees were any indication, railroaders and exhibitors considered RSSI 2016 a productive way to end the first half of what’s become, for many, a challenging year. Networking and note-comparing opportunities presented themselves in every exhibit aisle (and at receptions, meal times and a Casino Party). Along the way, attendees reminded me on more than one occasion that rail is a cyclical industry, that 2016 is just one of those hunker-down years — and that the not-too-distant future remains bright. For some companies, particularly diversified organizations that work across different disciplines and market segments, the present isn’t too bad, either.

But the future clearly was on display, the way it always is at an RSSI show. The C&S realm has always been a hotbed of innovation in rail country. While the major positive train control (PTC) systems integration contracts have been awarded, there’s plenty of other work left to do — and, possibly, new technology to develop, acquire and implement. So, some suppliers continue to seek ways to tap into the long and winding PTC implementation process — and the post-implementation world that’ll follow come 2020.

And as aisle-strolling at RSSI 2016 demonstrated, many technology providers are finding ways to plug into a variety of segments, including communications (wireless and otherwise), monitoring and detection, data analytics (the Internet of Things, Big Data) and data security, and power protection.

RSSI also sponsored a pre-exhibition seminar on the current version and proposed revisions to the Manual for Uniform Traffic Control Devices (MUTCD). It was conducted on June 28 by the Federal Highway Administration’s Bruce Friedman and the Federal Railroad Administration’s (FRA) Jerry Martin.

During the well-attended session, Friedman described how updates and revisions to the MUTCD are selected and how they might affect grade crossing installation, testing and maintenance work, RSSI officials said.