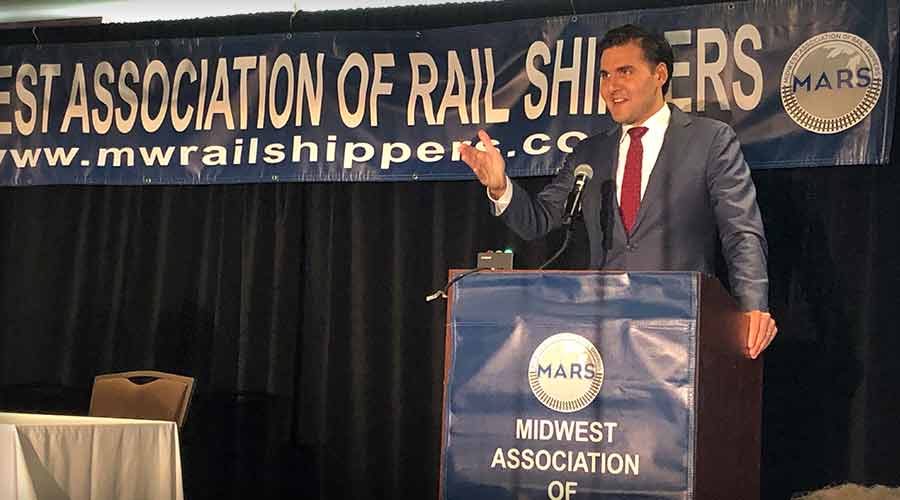 The impending rollout of positive train control (PTC) on U.S. railroads continues to send ripples throughout the rail supply industry, including providers of lightning and surge protection equipment and services.

"Positive train control has caused a lot of increased attention in better surge protection," says Jason Mies, national rail/transit manager for Smiths Power, a supplier of power distribution, conditioning, monitoring, and surge and lightning protection technology. "Our business has skyrocketed as [railroads] have been installing radios and antennas all over the place."

"Positive train control has brought a lot more electronics out to the tracks," says Matthew Caie, vice president and director of sales for ERICO Rail Connections, and a former director of ERICO's North American sales. "It's really changed the market significantly in the last 10 years."

Accordingly, ERICO officials have been talking with Class I, short-line and transit-rail managers as they strive to develop next-generation surge and lightning protection solutions. Those discussions prompted ERICO to develop an addition to its electronic protection device (EPD) family of surge protection technology, which ERICO plans to market in North America this spring. The devices combine surge protection with monitoring capabilities. Increasingly, railroads want one solution for all their protection needs, Caie says.

"They want grounding. They want surge protection. They want lightning protection," he says. "There is definitely more interest in how to put that all together."

"We're trying to leverage that experience and take it back to North America," he says.

Officials at Phoenix Contact, too, plan to turn the company's international experience into North American success. In 2007, the Germany-based firm established Phoenix Contact USA. The company currently operates three research-and-development facilities across the country, along with its corporate headquarters in Middletown, Pa.

Designed with PTC in mind, BE-AR devices are less likely to fail, faster to install and easier to maintain than traditional AAR ice-cube-style surge protection devices, he says. The remote monitoring feature is particularly critical for PTC "because there are a lot more electronics, and the FRA wants immediate reports of any failures," Mickievicz says. "I think a lot of people are going to find that to be invaluable."

Although the company's new surge protection devices are just beginning to gain traction among Class Is and short lines, the products are getting wider use on Amtrak's Northeast Corridor and Keystone Service, he says.

Meanwhile, Class Is have been using Smiths Power's brands — PolyPhaser, Transtector and ONYX, among them — for decades. Although the company provides products in several other industries, primarily telecommunications, the PolyPhaser RRF (Railroad Filter) line of products — which provides surge protection for radios while filtering out interference — recently cracked Smiths Power's top 10 selling list for the first time, Smiths Power's Mies says.

"[Railroads have] come to us and said, 'We need a better technology,'" he says.

System Reliability Is The Goal

And what works on the trackside also works in train yards. Increasingly, C&S managers are seeking lightning and surge protection technology that is both diagnostic and predictive, says Dan Niemiec, vice president of engineering for Trainyard Tech LLC, a provider of yard engineering and maintenance services, including performance monitoring of lightning and surge protection.

"When we're monitoring their circuits and there's a hit, we display that information in the system so the operators know where the problems are. We can identify which group of arresters took a hit," he says. "They can see things remotely in advance [of potential problems], and I think we'll be seeing more of that."

And while PTC requirements are a factor, Niemiec and others say, strong prevention, tight monitoring and quick response to lightning and power surge issues are critical for another reason: the size and cost of railroads' technology investments. Failure to do so can be costly — for railroad operations and the bottom line, suppliers say.

So, while PTC continues to lurch toward industry-wide implementation, railroads will continue to invest in reliable lightning and surge protection — with an eye on time and cost savings.

"The whole goal is to make systems reliable. The railroads need to have up-time stability," says Phoenix Contact's Mickievicz. "The more information you get, the more protection you want."