On making the (better) grade 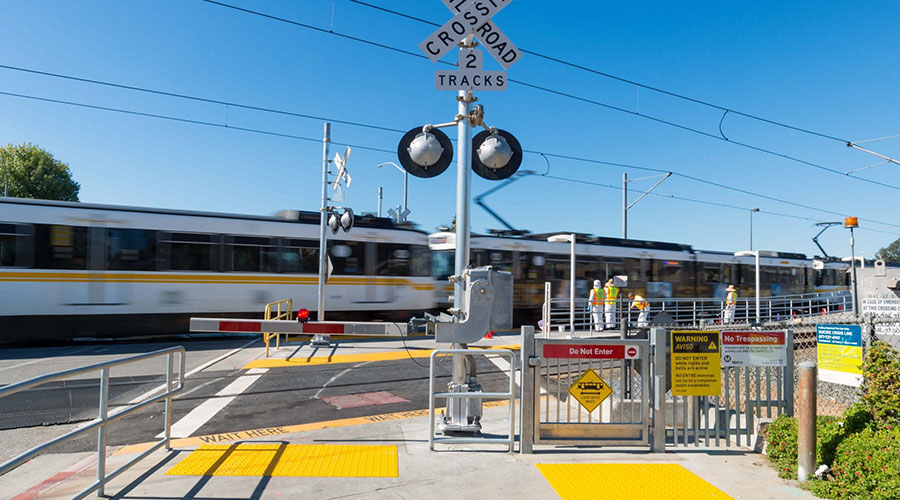 “Since Operation Lifesaver Inc. (OLI) started in 1972, we’ve seen an 84% decline in crossing collisions, yet trespassing continues to be a safety issue across the country,” said Jennifer DeAngelis, a spokesperson for OLI, a nonprofit organization that partners with railroads and a volunteer network to prevent crossing accidents and trespassing through public education and awareness campaigns. “We have helped reduce the number of train/motor vehicle collisions to approximately 1,901 in 2020. Still, in today’s busy and distracted society, a person or vehicle is hit by a train roughly every three hours in the United States.”

And nine out of 10 railroad-related fatalities are the result of vehicle-train crashes or pedestrian rail trespass incidents, DeAngelis said.

As communities begin to recover from the pandemic, and with more motorists, bicyclists and pedestrians on roads, some safety officials and advocates say accidents and incidents are on the rise.

In December, Progressive Railroading reached out to a range of representatives from Class Is and transit agencies to share what they’re doing to improve grade crossing safety. We asked: What are you doing to promote grade crossing awareness? What new technology is out there to help prevent crossing incidents? How are partnerships with safety organizations, state and local agencies, and other railroads helping the industry make a better grade at crossings?

Like many railroads and transit authorities, UP employs the three E’s — education, enforcement and engineering — to promote crossing safety awareness for motorists and pedestrians, said UP spokesperson Robynn Tysver.

“The [UP] engineering team has an entire team, called Industry & Public Projects (IPP), that leads the programs to produce and execute long term, effective projects that impact grade crossings,” she said. “They are dedicated to executing solutions that enhance the drivers’ and pedestrians’ opportunity to safely use railroad crossings.” 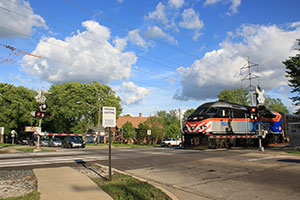 “Union Pacific’s IPP team has given traffic engineering 101 courses across the nation with agencies such as the California Public Utilities Commission, Nebraska DOT and Arkansas DOT,” Tysver said.

“We also sometimes offer local law enforcement personnel a chance to ride in a locomotive cab to observe motorist conduct, giving them a chance to deploy a nearby officer to issue warnings or possibly citations to motorists who break rail safety laws,” Tysver said.

And through a program called UP CARES — Crossing Accident Reduction Education and Safety — “anyone can request a safety presentation from a Union Pacific employee, including neighborhood clubs, schools and churches.” Tysver said.

“This allows the railroad and the road authority to focus on solutions that are data driven,” she said.

The Class I then shares the information with road authorities and state DOTs to “improve the likelihood of an effective solution at crossings,” she said.

“By focusing on the data, many times the solutions are enforcement opportunities, simple signs and pavement markings, and other low cost-high impact options,” Tysver said.

In addition, UP partners with a range of rail safety-oriented groups and agencies to promote and spread rail safety messages, including OLI, Safe Kids Worldwide, Chuggington and the Texas A&M Transportation Institute’s Teens in the Driver Seat program.

On the awareness front, KCS “continues its strong partnership with Operation Lifesaver in the states where we operate,” said spokesperson Doniele Carlson. “Additionally, KCS has utilized new mediums, such as geofenced social media campaigns and digital billboard signage to promote public safety awareness at grade crossings and trespass prevention.”

The railroad has made “a significant and ongoing investment” in highway grade crossing (HGC) safety by equipping warning devices with remote power monitoring systems to ensure an ample level of standby power supply is available for normal warning device operation during periods of commercial power outages, Carlson said.

“Currently, 85% of KCS’s network of HGC flasher lamps have this increased level of visibility and performance,” Carlson said.

“For example, KCS held Officer on a Train events during the 2021 Rail Safety Week in partnership with both the Northwest and Northeast Louisiana Transportation Safety Coalitions,” Carlson said.

In late 2020, KCS partnered with the Louisiana Department of Transportation and Development on a Consolidated Rail Safety Improvement grant. The project entails the installation of predictive warning time systems with flashing lights, gate arms and upgraded motion detectors at 24 crossings on a 157-mile rail corridor between Frierson and Starks, Louisiana. In addition, four crossings with low roadway traffic volumes will be closed, Carlson said.

CSX: On the training track

CSX offers hazardous materials training to provide first responders with the necessary information, experience and coordination of resources to respond effectively in an incident or emergency.

“In 2020, CSX adapted our classroom safety training from a traveling classroom rail car to a virtual training format,” said spokesperson Sheriee Bowman. “Leveraging a combination of virtual and hands-on training, we successfully trained 3,600 first responders over the course of the year.”

“Our CSX Public Safety Coordination Center (PSCC) is a central hub that helps to coordinate with first responders and dispatchers around the clock,” she said. “PSCC manages reports of railroad incidents such as crossing collisions, crossing signal malfunctions, theft, vandalism and trespassing to ensure all issues are promptly resolved.”

Another way to prevent crossing accidents is to reduce the number of crossings. CSX officials ask communities to identify three closure candidates for each new crossing that’s requested, Bowman said.

While crossing incidents at the Chicago commuter railroad were “meaningfully down” in 2020, Metra officials are “seeing a return to pre-pandemic levels of train/vehicle collisions at crossings,” said Hilary Konczal, the commuter railroad’s chief safety and environmental compliance officer. “Of note, there has been an increased share of collisions where the highway user struck the train versus being struck by the train, as well as collisions where the motorist actively disregarded crossing warning protections.”

But as the year-over-year accident data demonstrates, “it does not take long for safety awareness to erode,” she said.

As a result, stakeholders “must constantly work to measure what is going on with respect to crossing safety; identify and pursue opportunities for improvement; and refresh safety promotion campaigns to ensure they remain timely, targeted, and effective,” Konczal said.

Technology plays a role, too. Research institutions and private companies are making “significant strides” in camera technology, including the use of camera-automated alerts and artificial intelligence, she said. And cameras installed at crossings or on-board trains can help detect instances of trespassing by pedestrians or motorists — including crossing the tracks when crossing warnings are activated.

“Metra is working with academia to research and develop this technology,” Konczal said. “The more data that gets collected over time, the better the AI (artificial intelligence) can get at detecting and even predicting where and when trespassing may occur.”

The transit authority conducts safety presentations at recreation centers, community centers, libraries and schools within a 1.5-mile radius of its light-rail lines.

“LA Metro also showcases our award-winning, animated and darkly humorous SafetyVille videos that we began rolling out in 2016 to coincide with the opening of two light-rail extensions,” said spokesperson Joni Honor.

The videos — in English and Spanish — focus on safe behavior around trains, as well as around buses and roads. In total, the videos have received more than 10 million views on YouTube, Honor said.

Meanwhile, LA Metro’s newer light rail lines that feature street-running sections were designed and built with safety enhancements as a “lessons learned” from work on the agency’s A Line, she said.

“As a result, all have yielded good safety results, although we always strive for improvement,” she said. “Our collective efforts have resulted in about a 60% reduction in grade crossing accidents.”

Email comments or questions to grace.connatser@tradepress.com.