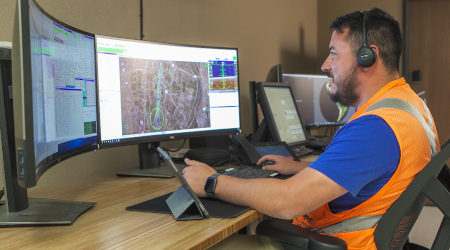 BNSF Railway Co. last week was granted exemptions from the Federal Aviation Administration’s (FAA) Extension, Safety, and Security Act of 2016, which will help lay the foundation for expanded drone operations, according to an FAA grant of exemption document.

BNSF has been testing and using unmanned aerial systems (UAS), more commonly known as drones, for supplemental inspection of rail infrastructure since 2016. The drone operations include "beyond visual line of sight" (BVLOS) flights, in which an aircraft is programmed with long-range flight plans and flown autonomously and out of view of an operator who remotely monitors its status.

“What the exemption does is enable BNSF to work with the FAA to streamline our BVLOS operations,” said Todd Graetz, BNSF telecommunications director, in an email. “We continue to make enhancements to our UAV operations where there is a business case that makes sense for our company.”

The FAA exemption allows BNSF relief from several rules that were either not necessary for its drone operations, or limited advancement.

“The exemption promotes safe progression of UAS integration into the National Airspace System,” the FAA wrote in the grant of exemption document. “This exemption also supports congressional intent to facilitate inspections, repairs, construction, maintenance, or protection of critical infrastructure under" the FAA Modernization and Reform Act.

According to the exemption document, the FAA granted BNSF:

To learn more about BNSF's drone operations, read this feature article in the April issue of Progressive Railroading.