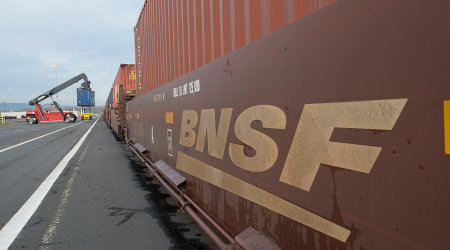 BNSF Railway Co. and the Port of Portland have begun offering a new service at Terminal 6 that enables shippers to move their products on a rail shuttle to the Puget Sound ports.

The new partnership will move containers between Portland and Seattle/Tacoma, where goods can be loaded onto ocean carriers. The rail service will operate five days a week.

The announcement follows news that Swire Shipping will begin a monthly container call at Terminal 6 this month, offering regional shippers a new opportunity to move their goods overseas, port officials said in a press release.

"The rail service will complement the monthly container ship call by giving our local shippers another path to market," said Port of Portland Executive Director Curtis Robinhold. "We hope to continue building on this momentum and interest at Terminal 6."