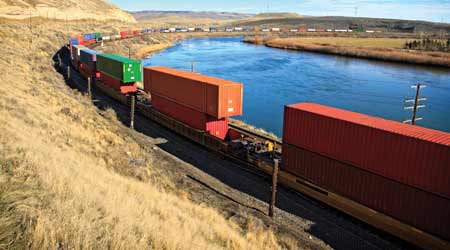 Canadian Pacific, CN and Union Pacific Railroad have incorporated long trains into their operating strategies and continue to aggressively push the length envelope. But BNSF Railway Co., CSX, Kansas City Southern and Norfolk Southern Railway only operate them on a case-by-case or limited basis, such as to transport grain or containers in greater volumes. 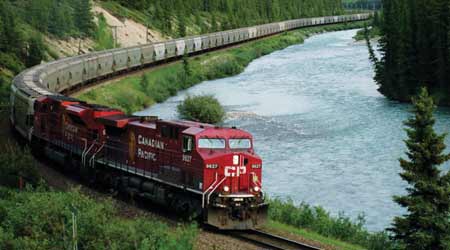 When it comes to the reasons for lengthening trains, all the Class Is are in unison: to boost productivity, gain more efficiencies and cut costs.

Transporting more freight on one train helps to maximize locomotives, crews, fuel and other resources, and trim labor and diesel expenses. It also enables the railroads to reduce the number of trains on their networks, creating more space on certain route segments for additional traffic.

Although there aren’t many long trains navigating freight railroads’ systems these days — 95 percent are shorter than 10,000 feet, according to the Association of American Railroads — Class Is have been lengthening trains for quite a while.

“Operating longer trains on the nation’s rail network is not a new phenomenon. [We have] safely operated trains of all lengths for years,” said CSX spokesman Christopher Smith in an email. “CSX data shows that over time, train length has evolved as business demands have warranted.”

Given that shippers’ demands and the supply chain continue to evolve — and that Class Is continually seek better operating performance — long trains likely are here to stay. So much so, some Class Is are constructing 10,000-foot sidings, extending sidings or building more double track to accommodate them.

UP is adding more sidings to support ongoing efforts to lengthen trains. A number of technologies — including positive train control — enable the Class I to push train length, UP officials say. In addition, the railroad uses analytics to help determine and increase train lengths.

UP also is advancing a “Blend and Balance” initiative that in part involves long trains. The initiative calls for blending service networks — such as automotive and manifest trains — and better balancing resources to boost productivity, reduce idle time and improve asset utilization. 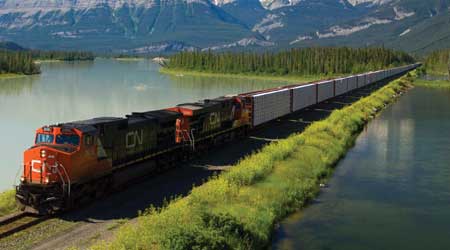 CN also is making strides in lengthening trains. The Class I doesn’t stress footage data for long trains; instead, it focuses on train productivity, or gross ton miles (GTMs) per train mile.

CN continues to build 10,000- to 12,000-foot sidings and construct more double track to support long trains. Since 2000, the Class I has taken on 188 long siding and double-track projects.

This year, the railroad is advancing more of those projects in the following provinces:

CP also is building and extending sidings to accommodate long trains. This year, the Class I plans to build three new sidings and extend six others across its network.

CP is making other investments that involve long trains, too. On June 7, the Class I announced plans to spend more than a half-billion Canadian dollars on new high-capacity hopper cars that will help the railroad work toward an 8,500-foot unit train model for dedicated grain trains.

CP placed an initial order for 1,000 grain hoppers with National Steel Car Ltd.; more than 500 of them are expected to enter service by year’s end. Over the next four years, the Class I plans to order about 5,900 hoppers in total.

“For more than 100 years, grain has been embedded in CP’s DNA. It’s the largest sector of [our] business by revenue,” said CP President and Chief Executive Officer Keith Creel in a press release. “These new rail cars will revitalize our fleet and help cement our status as an industry leader in grain transportation for decades to come.”

For now, the shorter and lighter hoppers will enable CP to boost capacity per grain train about 16 percent by placing 118 instead of 112 cars on the current 7,000-foot unit trains. The 8,500-foot trains will include a minimum of 134 hoppers — or 20 percent more cars than the current trains — and eventually will sport 147 cars.

The railroad is working with grain elevators and ports to build or expand infrastructure to accommodate the loading and unloading of 8,500-foot trains clear of any mainline.

CSX also aims to lengthen some trains to boost throughput and improve asset utilization, but not to the extent of CP, CN or UP. As part of its implementation of scheduled railroading, CSX recently increased train lengths by consolidating train profiles to achieve efficiencies, said spokesman Smith in his email. 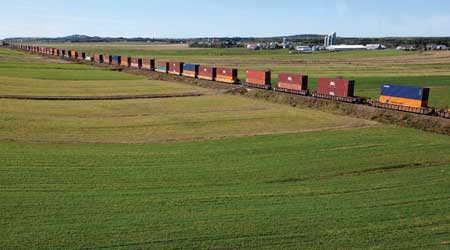 All Class Is are lengthening intermodal trains to a degree to gain efficiencies.
CN

“Increased train length contributed to a significant reduction in the number of trains operated on a daily basis. Year over year, [we] reduced the total number of active road trains per day by approximately 26 percent, or about 222 trains per day,” said Smith.

Operating longer and fewer trains both enhances safety and generates several benefits, such as fewer train starts and enhanced productivity, he said. Longer trains — which often utilize mid-train distributed power — also are easier for engineers to operate and the Class I has logged far fewer train-handling exceptions on such trains, said Smith.

The public can benefit from long trains, too. By reducing the number of trains CSX operates, there are fewer opportunities for trains and vehicles to meet at grade crossings, said Smith. “Consequently, [we’ve] experienced fewer crossing incidents per year as train length increases and train count decreases,” he said.

KCS also has cut the number of trains operating in its network — but only slightly — by running some longer grain and intermodal trains. The railroad searches for opportunities to operate long trains if they don’t burden customers, said KCS Executive Vice President and Chief Operating Officer Jeff Songer during a late May interview. An example: if such a train reduced transit time by a day and didn’t require a sacrifice from a customer, he said.

The overall length of KCS’ grain trains has increased 7 percent as the Class I aims to boost the number of cars from 80 to 100.

“We want to be consistent with 100-car grain trains at origin and destination,” said Songer. “That way, it’s balanced.”

KCS has jointly invested with a shipper in Mexico to handle 100-car grain trains at both origin and destination, he said.

Three sidings along the 320-mile speedway have been extended from 6,000 to 10,000 feet to support those trains. Now, any new or extended siding on KCS’ network must stretch to 10,000 feet, said Songer.

The railroad currently is analyzing train starts and other data to determine if manifest trains could be lengthened without impacting customers, he said.

Meanwhile, BNSF is testing long trains on a limited basis. The tests primarily involve 12,000- to 16,000-foot intermodal trains moving from ports in Los Angeles and Long Beach, California, to Chicago.

“Our test runs are exploring what types of productivity and efficiency gains can be achieved, as well as giving us more insights into the logistical challenges and implications of running longer trains,” said BNSF spokeswoman Amy Casas in an email.

For now, long trains aren’t part of the railroad’s operating strategy, she added.

“We are more focused on making sure our trains are the right size to meet our customers’ needs,” said Casas. Overall, the Class I’s average train length is holding steady at about 8,000 feet, but it can vary depending on the commodity, she said.

“In mountain territory, a conductor can walk quite a ways from the locomotive, making communication with the cab difficult. That puts workers in dangerous situations,” said Risch, who was a locomotive engineer for more than 30 years.

Another potential danger: additional in-train forces, which make it hard to keep a long train intact, he said.

“When you double a train from 100 cars to 200 cars and then the train breaks up, the efficiencies the railroads talk about go out the window,” said Risch.

The union last year asked the Federal Railroad Administration (FRA) to issue an emergency order limiting train length. But in March 2018, FRA officials sent a letter to SMART TD leaders stating there isn’t sufficient data or evidence to justify such an order.

GAO officials are working on the study, which is expected to be released early next year.

“I think there [then] will be some background for Congress to use if it chooses to delve into the issue,” said Risch.

The main problem for long-train opponents is a lack of data supporting their arguments, especially since the FRA and Surface Transportation Board don’t compile such information, he said.

For example, there’s no evidence to back the SMART TD’s claim that railroad workers aren’t sufficiently trained to handle long trains.

KCS’ Songer believes there’s no merit to the union’s argument.

“Railroads are doing all they can to improve safety,” he said.

UP officials concur, especially in terms of ensuring workers can safely handle long trains. The Class I’s crews receive detailed information about the train they operate, including length and weight, and obtain ongoing training to ensure they’re prepared for unique train-handling situations, according to a UP spokesperson.

Moreover, the railroad on a daily basis typically operates 14,000- to 15,000-foot trains in a significant portion of its double-track network without incident, said EVP and COO Cameron Scott on May 31 during UP’s investor day in Omaha, Nebraska.

“So, from a safety perspective, there isn’t an issue there,” he said.