Curwin Piper typically brings his rig to BNSF Railway Co.’s Dallas-area intermodal terminal four or five times a day. A truck driver for WB Container Services Inc., Piper got used to spending five minutes or more providing shipment information and waiting at an in-gate kiosk each time he delivered a trailer to the facility in Alliance, Texas, then another five-plus minutes doing likewise when he departed.

But now, he’s growing accustomed to a more efficient terminal entry and exit process. Piper earlier this year became one of the first users of BNSF’s new RailPASS mobile application, which is saving him nearly an hour each day.

Available for free through the Apple Store or Google Play, RailPASS is designed to expedite in- and out-gate processes for truck drivers who drop off, pick up or need to locate a trailer or container at a BNSF intermodal facility. The app is part of the Class I’s efforts to boost intermodal service performance to help generate more domestic volume, which is the topic of the cover story in Progressive Railroading’s May issue. 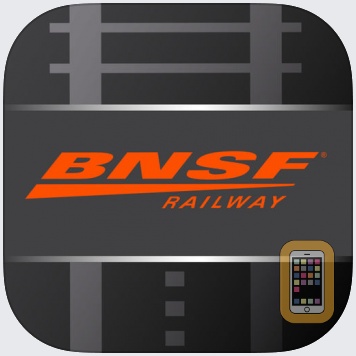 The RailPASS mobile app is available from the Apple Store and Google Play. Source: Google

Drivers can access RailPASS on their smartphone or tablet to input shipment data, receive equipment status information and update an assigned parking location. The app eliminates the manual inputting of information at a terminal’s gates and reduces the need for a trucker to stop at a driver assistance building.

The Class I began to develop RailPASS last year due to a “longstanding appreciation and understanding of supply chain velocity,” and the role truck drivers play in it, says Brant Ring, BNSF’s assistant vice president of intermodal hub operations.

“Before, it was like flying on an airline and you had to use a gate agent for help getting in and out of a gate. Now, you know the location of a unit ahead of time,” he says. “It minimizes time spent in a facility.”

“It wasn’t developed in a vacuum. It’s an app for drivers almost designed by drivers,” says Ring. 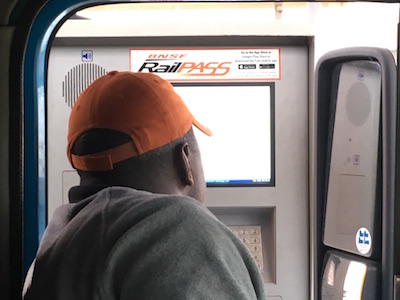 A trucker for 16 years, Piper helped test the app before it was launched in mid-February. He didn’t care for it at first because it took too long to input information, he says.

“But it was my fault. I wasn’t familiar with it and I wasn’t applying myself to it,” says Piper. “I needed to do it from the beginning to the end, and then it works best.”

Now, he tries to convince other truck drivers to use it by answering their questions or easing their concerns about the app. Piper learned that by plugging shipment data into RailPASS prior to arriving at the Alliance terminal’s gate, he can enter the facility in about 30 seconds.

He provided an app demonstration on March 29. Parked on the side of a road near the Alliance terminal, Piper spent about two minutes inputting and retrieving information about the trailers he was dropping off and picking up. He then drove to the entrance and spent half a minute pushing a few buttons at the kiosk.

“I could play a game on my phone before while I was waiting at the gate,” Piper said, as he took a ticket that listed the parking spot for his trailer.

After spending less than 10 minutes to disconnect and drop his trailer, Piper drove his truck to another parking spot listed on the ticket. There, he picked up a trailer he needed to deliver to Mount Vernon, Texas, about two-and-a-half hours away. After he attached the trailer in a few minutes and drove to the exit gate, he needed only about 40 seconds at the kiosk to depart the terminal.

“Anything to save time — that’s big to us drivers,” says Piper. 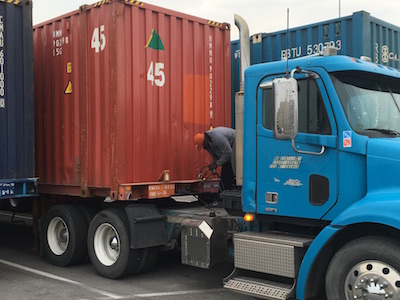 Piper disconnected the trailer from his rig shortly after entering the BNSF facility. Photo: Jeff Stagl

On average, gate check-in times at the Alliance terminal have dropped from about 3 minutes to 30 seconds, says BNSF Senior Hub Manager Cale Johnson.

“The big difference is when that time savings is multiplied by 200, when the gate is very busy and trucks are backed up,” he says.

As of April 22, about 8,000 drivers had downloaded the app and were actively using it. BNSF anticipates as many as 20,000 downloads after RailPASS is rolled out to the Class I’s 25 intermodal terminals by mid-year, says Ring. The app will provide a bigger efficiency boost at the 10 facilities that feature automated gate systems, he says.

Several truck drivers have posted favorable reviews of the app on the Apple Store or Google Play sites. One wrote: “This app saves me time. Scanning at the kiosk is simple and fast. I love the parking verification feature — another big time saver when my assigned parking spot is taken.” Another posted: “Drivers can check if the trailer is ingated before entering the ingate line. Also release numbers can be verified before heading towards the outgate.”

However, some users were critical of RailPASS, including this review: “Not ready. Too many bugs. Fire the developer. Try again.”

In the coming months, BNSF plans to introduce additional versions of RailPASS sporting new enhancements and features aimed at making the tool more useful for truck drivers. For example, a new feature will focus on the container yard environment, enabling drivers to more quickly check containers in and out of a terminal, says Ring.

For BNSF, any tool that can help increase fluidity and hasten operations is a big plus, he says.