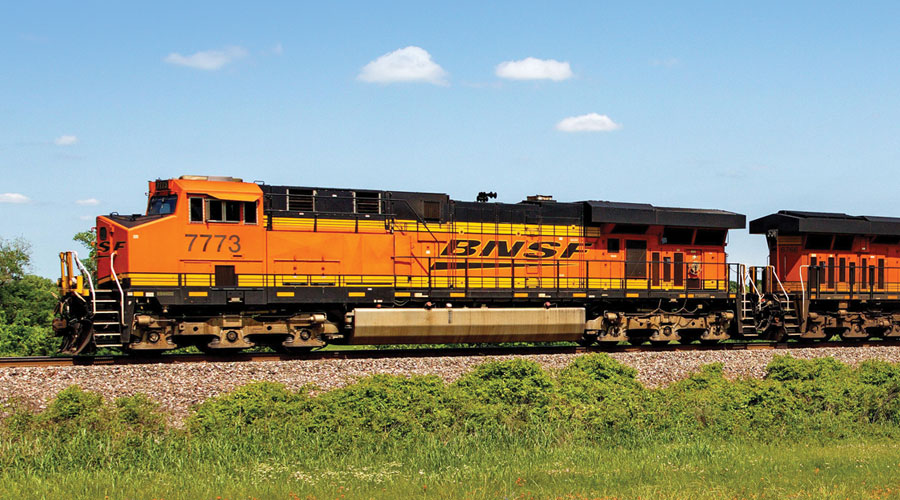 Although BNSF Railway Co. only within the past year committed to achieving a 30% reduction in greenhouse-gas emissions (GHG) by 2030, North America's largest freight railroad by volume has been working on shrinking its carbon footprint for decades.

But the 30%-by-2030 goal (from a baseline year of 2018) is now an essential part of the Class I's sustainability plan, which is being rewritten for release later this year. In 2021, the railroad unveiled a white paper titled "Orange is the New Green" — orange being BNSF's corporate color — to describe the methods needed to reduce GHG emissions and how they can help customers meet their own environmental goals. Locomotive fuel consumption accounted for about 80% of BNSF’s GHG emissions in 2018.

The company publishes its corporate sustainability report every two years. The last report covered 2018-2019; the next one will address 2020-2021. Although earlier reports have reviewed progress made, the next report will also focus on the future, including the 30% reduction in GHG emissions.

That first category — fuel efficiency — is the "mom and apple pie" of sustainability practices because it’s something all big railroads have been working on for decades, Lovenburg says.

"Over the past 40 years, we’ve cut our emissions in half," he says of the rail industry. "We've done it through standardized efforts by modernizing equipment, buying newer locomotives and adding energy management software and idle control software. It’s applying best practices and making sure that we’re optimizing the amount of horsepower that we have per trailing ton. Those things are fairly consistent across the industry."

In 2020, U.S. freight railroads consumed 675 million fewer gallons of fuel and emitted 7.6 million fewer tons of carbon dioxide than they would have if their fuel efficiency had remained constant since 2000, according to BNSF's white paper.

BNSF claims to have the largest number of newest and cleanest-emissions locomotives in North America. Since 2005, the Class I has acquired more than 3,600 new locomotives, including more than 300 units since the Environmental Protection Agency's Tier 4 emission standards took effect in 2015.

Moreover, the railroad has equipped more than 3,900 locomotives with energy management systems that allow the throttle and dynamic brake to be controlled automatically; and more than 99% of BNSF's locomotives are equipped with automatic engine start/stop devices that shut down an idling locomotive to minimize fuel waste.

BNSF also has begun partnering with manufacturers on developing and testing biofuels and renewable diesel. In March, BNSF and Wabtec Corp. announced they’ll test the performance of biodiesel (B20) and renewable diesel (R55) in revenue service on Wabtec Tier 3 and Tier 4 Evolution Series locomotives. BNSF will operate the units between Barstow and Los Angeles, California.

Biofuels represent a "unique near-term opportunity" to have a big impact on lowering carbon intensity, Bob Bremmer, group vice president for Wabtec’s Fleet Innovation and Transformation division, said when the program was announced.

Wabtec has already approved a 5% biodiesel (B5) and 30% renewable biodiesel (R30) blend for its locomotive engines, and BNSF and other railroads want the percentages in fuel blends to increase even more. BNSF and others are working with Progress Rail and Wabtec to test higher-percent blends in California.

"Once we can use higher-percent blends, we can obviously take advantage of that lower carbon intensity," Lovenburg says.

Operating locomotives on renewable diesel in California is also "cost competitive" with fossil-fuel diesel because the state offers subsidies for use of renewables, he adds.

BNSF is active with the Association of American Railroads' renewable fuels committee, which shares information across the industry on the testing of renewables and biofuels.

"Not all railroads are doing the testing, but in terms of the ultimate goal all would like to use higher-percent blends of biodiesel and renewable diesel," Lovenburg says.

"The manufacturers are now moving into the next generation, pushing it to roughly three times as much battery energy storage," he says. "I would say 8 megawatts is probably the next generation of locomotives that you'll see coming out within a couple of years."

Another part of BNSF's advanced energy initiative is an agreement with Progress Rail and Chevron U.S.A. Inc. to test a locomotive powered by hydrogen fuel cells. Late last year, the three companies signed a memorandum of understanding to develop a demonstration project that calls for Progress Rail to design and build a prototype fuel cell locomotive for line-haul or other types of rail service; Chevron to develop the fueling concept and infrastructure to support the locomotive; and BNSF to test it.

The demonstration's goal is to confirm the feasibility and performance of hydrogen fuel as an alternative to traditional fuels for line-haul rail service. Chevron has been scaling up its hydrogen business with customers seeking to cut their carbon emissions.

"Our work with Progress Rail and BNSF is an important step toward advancing new use cases for hydrogen in heavy-duty transport as we seek to create a commercially viable hydrogen economy," said Jeff Gustavson, president of Chevron New Energies, in a press release issued at the time of the announcement. 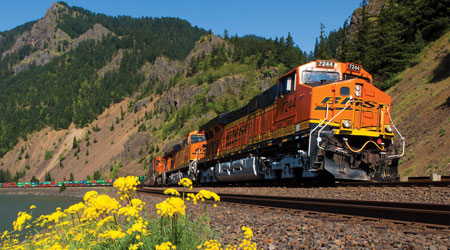 Also on the advanced energy front: BNSF is expanding its use of electrified equipment at intermodal hubs, including the installation of widespread electric cranes that produce zero emissions onsite and significantly reduce the number of diesel-powered hostlers.

In addition, the railroad has implemented automated gate systems at its busiest facilities to speed up truck entry and exit, which reduces truck idling. About 90% of freight that enters BNSF's intermodal facilities passes through an automated gate. 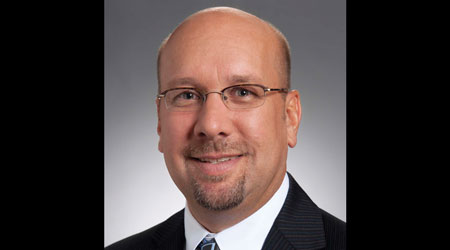 "As a key part of meeting our carbon targets, we also have to meet our customers’ expectations."
— John Lovenburg, VP of environment and sustainability

In 2020, BNSF started testing touchless technology that allows shipment information to be transmitted in advance, linking trucks’ on-board computer systems with the RailPASS app. The technology has eliminated the need for driver interaction at the gates, which reduces idling time and improves driver safety during the pandemic, Lovenburg says.

Through fuel efficiency, the use of more renewable and biodiesel fuels and other advances and operating practices, the railroad has significantly reduced its fleet’s total emissions of nitrogen oxides (NOx) and particulate matter (PM), BNSF claims in its white paper.

The railroad is taking other steps to shrink its carbon footprint, too. For instance, BNSF has been expanding its use of solar power, with examples including its solar array installation at the Stockton intermodal facility in California, and over 500 locations where it uses solar panels and batteries as backup power for signal systems.

"Solar-battery backup power for signals is a great example of where else we are using renewable energy," Lovenburg says.

To be sure, BNSF's environmental practices go hand in hand with efforts to convert more freight traffic from long-haul trucks. Railroads account for 40% of U.S. freight, but only 2.1% of U.S. transportation-related GHG emissions. A train can move freight more than three times as far as a truck per gallon of diesel fuel.

As major shippers seek to achieve their own sustainability goals, BNSF offers potential customers a tool to calculate how much shipping by rail would help them reduce carbon emissions.

"For customers who ask, we'll give them a carbon letter that gives the information on their carbon emissions based on how much they’ve shipped and what type of products they’ve shipped. We’ll also include an estimate of what their carbon footprint would have been if they had shipped by truck," Lovenburg says.

An assist from Certified Sites

To make it even easier to ship by rail, the Class I's economic development team will help customers locate a new facility or expand an existing site near a BNSF line. Through its Certified Sites Program, BNSF officials help customers find optimal rail-served locations and work with local economic development criteria to ensure a potential site meets the Class I’s readiness standards.

Moreover, the railroad's logistics park strategy relies on an intermodal hub to anchor distribution centers nearby. By co-locating in one of the parks, businesses can streamline their supply chain, thereby reducing carbon emissions.

"When you're co-locating, you’re getting the advantage of getting your products on and off rail more quickly, so you’re limiting the amount of truck time to get your products to market and to rail," says Lovenburg. "It can reduce your carbon footprint by having that local access and also by speeding up the time of those movements."

Although the pandemic sent shockwaves through the nation’s supply chain and economy, Lovenburg doesn’t believe the past two years have caused a setback to BNSF’s or customers’ environmental goals.

"I would argue the number of inquiries we get from customers to fill out sustainability surveys or the number of customers setting carbon targets has actually accelerated in the last couple of years," he says.

Likewise, BNSF hasn’t taken its eye off the sustainability ball during the pandemic. If anything, the railroad has accelerated its efforts.

"We see [sustainability] is part of the future. And as a key part of meeting our carbon targets, we also have to meet our customers’ expectations as far as where they’re going," says Lovenburg.

BNSF plans to continue shrinking its environmental footprint via sustainability projects designed to both reduce emissions and improve efficiency — a solution that Lovenburg calls a "sustainable win-win." One example is the switch from diesel-electric to battery-electric locomotives and equipment. Battery-electric equipment is better for the environment and two to three times more efficient than diesel electric.

"We don’t want to have a great battery-electric locomotive and then say, 'Let's call it a career'," Lovenburg says. "If the economics also work, that’s how the industry is really going to take off. That’s really our vision: to find those sustainable win-wins that allow us to scale these things and really transform the industry."