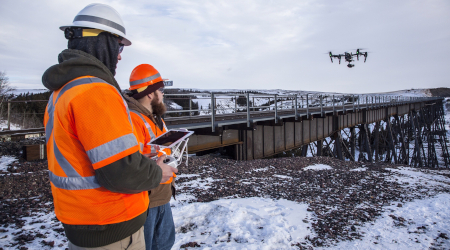 BNSF Railway Co.
is leveraging drone technology to bolster inspection processes for its rail network, refine predictive analytics capabilities and test long-range drone operations to set the stage for future use in the industry.

In various departments, the railroad employs pilots who are certified by the Federal Aviation Administration (FAA) to fly unmanned aerial vehicles (UAVs), more commonly known as drones. The employees use the technology to supplement maintenance-of-way inspections, BNSF Telecommunications Director Todd Graetz said in an email.

When drones are equipped with cameras and sensors, they can be used to collect data, images, video, LiDAR surveys and more — material that’s useful in supplementing inspection information gathered in more traditional ways.

“At BNSF, we see UAVs as a deployment tool that can help us leverage the use of various sensors to continue to make the railroad even safer,” Graetz said. “Equipping our UAVs with high-resolution day/night cameras, multispectral and thermal sensors, just to name a few, is helping us refine our predictive analytics capabilities and the development of actionable data.”

BNSF has used rotorcraft drones to complete a variety of tasks, from collecting images to general surveying. For example, the Class I used drones equipped with cameras to collect high-definition images of concrete piers on a rail bridge 75 feet above the Abo River in New Mexico. The railroad also deployed them during Hurricane Harvey in 2017 to collect “critical information on network conditions in places that would have been unreachable or unsafe to send out BNSF crews,” Graetz said.

BNSF tests the capabilities and applications of drones by performing three rotations over several dozen bridges around the railroad’s system. The aim: to determine flight capabilities and develop baseline data models.

To improve upon those models, BNSF is researching tools that could enable more precise navigation and image collection, which in turn would help refine the detection of changes on bridge structures, Graetz said.

“We view UAVs as just part of our toolkit and our research into their use continues,” Graetz said. “Our focus remains on being able to detect items that current inspection methods cannot detect or to detect them in a data-driven manner that, when combined with other inspection technologies, can help structure predictive and condition-based inspections.”

While other Class Is have been using drones in similar capacities, BNSF is the only Class I approved by the FAA to venture into beyond-visual-line-of-sight (BVLOS) operations.

Selected by the FAA in 2015, BNSF was one of three organizations — the others are CNN and commercial drone data company PrecisionHawk — granted permission to test various drone uses as part of the Pathfinder program, an initiative to enable growth of the drone industry. BNSF was tasked with testing the use of BVLOS operations to inspect track and bridges, as well as testing the challenges of command-and-control in this type of operation.

In standard line-of-sight operations, a pilot operates a drone from the ground with full view of the aircraft. In BVLOS, the aircraft is programmed with long-range flight plans and launched; then it follows the flight plan autonomously and is out of view of an operator who remotely monitors its status from a ground control station. The collected data is often extracted from the drone at the end of its flight.

By 2016, BNSF drone operators had launched the railroad’s first BVLOS flight on a 132-mile stretch of track in New Mexico. The BVLOS operators are FAA-certified and required to have a private pilot license with an instrument rating.

Now, the Class I is using the technology and continues to evaluate its “best use case,” Graetz said.

Crews use the drones to inspect operations involving repair, construction, maintenance or protection of buildings both day and night on BNSF-owned or controlled properties. These drone operations happen mostly in rural areas, passing through or near villages, small towns or outlying areas of larger communities.

The Class I operates fixed-wing, 55-pound aircraft that can hover, take off and land vertically. The drones have electric motors and a single gasoline powered engine.

Collins Aerospace installed command non-payload control (CNCP) radios on existing radio towers that are positioned along the Class I’s track. These towers are equipped with backhaul connectivity for communication purposes and positive train control. Collins Aerospace used this infrastructure to control the autonomous drones during flight.

Developed by Collins Aerospace in partnership with NASA, CNPC is a waveform that offers a dedicated command-and-control radio that is not multitasked to load or offload the sensor information a platform collects, such as images or video, Svatek said.

The command-and-control network is designed to keep the drone connected to a ground radio with the best connection. As the aircraft travels through its flight plan, the radios communicate and automatically “hand off” connection to the radio with the best connectivity, Svatek explains. This enables drone monitors to have a positive command and control over the drones — that is, to know the location and status of the drone during flight.

Flight information is stored in Collins Aerospace’s service portal WebUAS, which is connected to the company’s monitored server farm in Annapolis, Maryland.

BNSF’s existing infrastructure and backhaul connectivity towers made the operation possible — without these, inspections via BVLOS flight would not be possible, said Svatek.

Since the start of long-range flight testing, BNSF has faced a range of challenges, including data collection and dissemination. But as the UAV analytics industry matured, BNSF was able to develop internal analytics and cloud-based systems to sort, store and distribute the significant amount of data that the drones collect, Graetz said.

The railroad also is working to help BVLOS pilots develop the perspective that they’re actually in the aircraft, Graetz said. To that end, the Class I worked with the FAA and several vendors to develop a series of systems designed to provide pilots with an awareness of the terrain and other aircraft in the area. Tools included a real-time day-and-night pilot camera, aviation radio connections, and linked into the FAA air traffic control system.

The railroad also developed weather tolerance capabilities for the drones and a way to keep drone pilots aware of the weather, even when they are hundreds of miles away from the UAV.

“All of our pilots have had a great deal of training as it pertains to operations in both cold and hot climates, and during inclement weather including rain and snow,” Graetz said.

One particular ongoing challenge for long-range flights has been high winds, he added. High winds can slow or speed up flight times, posing challenges to fuel consumption and image precision.

Looking ahead, BNSF plans to continue evaluating a range of UAV technologies and analytics software that focus on supplementing inspections and detecting changes that, over time, could impact the railroad’s operations.