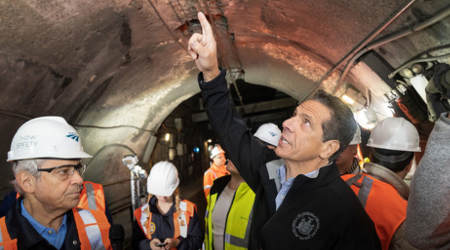 The governor, whose comments on the meeting are posted on his website, described the talk as "positive," although no agreement was reached on how the project would be funded.

"I think it's fair to say that the president was receptive to what we're taking about, and the president said that he wanted to take the next steps to find a way forward," Cuomo said, according to a transcript of remarks made after the meeting.

Also in attendance at the meeting was U.S. Department of Transportation Secretary Elaine Chao, according to Cuomo.

The next steps will involve Port Authority of New York and New Jersey (PANYNJ) officials working with the U.S. Department of Transportation "to find out how we could get to the bidding process and give bidders the security to know that this is a project that is going" to happen, Cuomo said.

Wednesday's meeting followed a video Cuomo made and sent to Trump in October to illustrate the 100-year-old Hudson tunnels' crumbling infrastructure. The tunnels were further damaged when they were flooded with saltwater during Hurricane Sandy in 2012.

The Hudson tunnels, which are used by Amtrak and New Jersey Transit trains, are a vital piece of the Gateway program because they represent "one of the most critical junctures in the Northeast Corridor," the governor said.