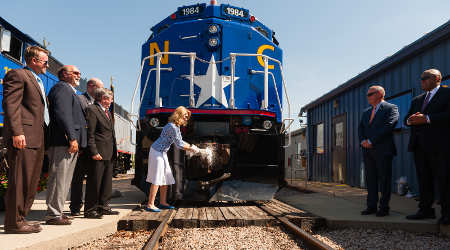 The North Carolina Department of Transportation (NCDOT), which operates the service with Amtrak, names its locomotives for cities along the Raleigh-to-Charlotte corridor. The two rehabbed locomotives were dubbed the "Town of Cary" and the "City of Kannapolis."

Both locomotives originally were built in 1990 for Toronto's GO Transit system. As part of NCDOT's Piedmont improvement program, each unit was rebuilt mechanically and electrically.

Purchasing and rebuilding the locomotives cost $2.15 million each. That compares to the $6 million to $7 million cost of buying a new locomotive.

Through the Piedmont improvement program, NCDOT is investing more than $500 million in rail improvements between Raleigh and Charlotte. The program also provided funds for a modernization and expansion to the Cary Depot's passenger information system.