The National Transportation Safety Board (NTSB) earlier this week issued its preliminary report on the Amtrak derailment that occurred March 14 near Cimarron, Kan. 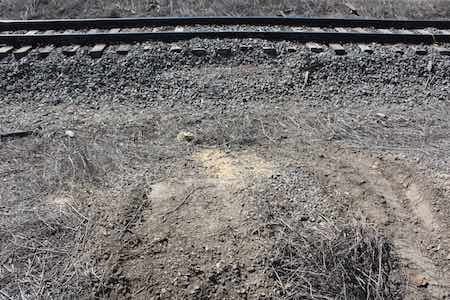 NTSB investigators observed perpendicular tire tracks on the north side of the track where the Amtrak train derailed.
(Click to view larger.)
Photo: Kansas Highway Patrol

The Los Angeles-to-Chicago train was operating on BNSF Railway Co. track when it derailed, injuring 28 passengers. NTSB investigators found that railroad ties and tracks along this portion of track were out of their normal positions and established the point of derailment 25 feet beyond the location.

At the scene, investigators found fresh damage to the north ends of the ties and fresh tire tracks perpendicular to the tracks. In addition, they found a small amount of flaked corn, which is a type of cattle feed.

Investigators traced the tire tracks to a feed lot owned by Cimarron Crossing Feeders LLC, where the tread on a 2004 Kenworth International truck matched the tire track impressions at the scene, NTSB officials said.

The truck hauls flaked corn and distributes it to feed bins.

Additionally, NTSB officials noted that the left and right mounting brackets on the truck's front bumper were broken.

The train was traveling at 60 mph — the designated speed for the track — when the emergency brakes were applied, the NTSB determined after reviewing event recorder data.

Amtrak and BNSF estimated their damages at more than $1.4 million, NTSB officials said.