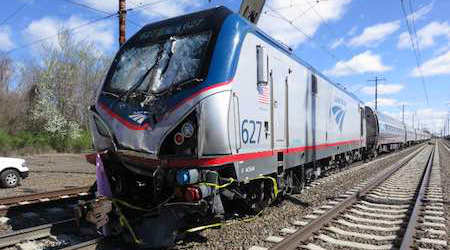 An Amtrak derailment that killed two track maintenance workers last year was caused by "deficient safety management" across the railroad, which resulted in a lack of a "clear, consistent and accepted vision for safety," the National Transportation Safety Board (NTSB) announced yesterday.

The derailment occurred April 3, 2016, in Chester, Pennsylvania, when an Amtrak train traveling from Philadelphia to Washington, D.C., struck a backhoe, killing the backhoe operator and a track supervisor. Thirty-nine other people were injured.

Prior to the derailment, the train engineer saw the equipment and people working on the track and applied the emergency brake that slowed the train from 106 mph to 99 mph at the time of impact.

Factors that led to the accident included allowing a passenger train to travel at maximum authorized speed on unprotected track where workers were present, the absence of shunting devices, the foreman's failure to conduct a job briefing at the start of the shift, and numerous inconsistent views of safety and safety management throughout Amtrak.

"Amtrak's safety culture is failing, and is primed to fail again, until and unless Amtrak changes the way it practices safety management," said NTSB Chairman Robert Sumwalt in a press release. "Investigators found a labor-management relationship so adversarial that safety programs became contentious at the bargaining table, with the unions ultimately refusing to participate."

Also contributing to the accident was the Federal Railroad Administration's (FRA) failure to require redundant signal protection, such as shunting, for maintenance-of-way work crews, board members said.

As a result of its investigation, the NTSB issued 14 safety recommendations: nine to Amtrak, two to the FRA and three to the Brotherhood of Maintenance of Way Employes Division, American Railway and Airway Supervisors Association, Brotherhood of Locomotive Engineers and Trainmen, and Brotherhood of Railroad Signalmen.

Among its recommendations, the board called on both Amtrak and the unions to work together to ensure everyone is participating in safety programs; to develop a viable safety reporting system; and to implement a safety management system throughout the railroad.

In response to the NTSB report, Amtrak officials said in a prepared statement that the railroad has been "transforming" its safety culture since the derailment. The railroad already has begun implementing many of the actions that the NTSB called for in its recommendations.

"We have a team of 20,000 employees who understand that safety is our No. 1 priority, and together we safely operate more than 500 trains across our 21,000-mile network every day," Amtrak officials said.