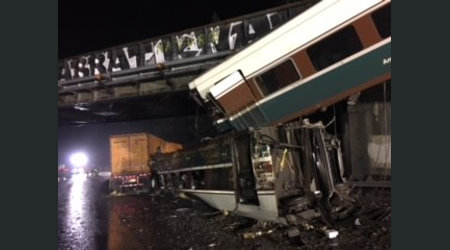 The engineer of the Amtrak Cascades train missed seeing a speed-limit sign before the train derailed from an overpass in Washington state last month, the National Transportation Safety Board (NTSB) announced yesterday.

NTSB investigators interviewed the train's engineer and a conductor the week of Jan. 15, about a month after the fatal derailment killed three passengers and injured dozens of others. The engineer and conductor, who were in the lead locomotive during the Dec. 16 accident, were unable to be interviewed until recently because of their injuries.

The train — which consisted of a leading and trailing locomotive, a power car, 10 passenger cars and a luggage car — was traveling at 78 mph when it derailed from a highway overpass near DuPont. The lead locomotive, power car and two passenger cars derailed onto Interstate 5 below the overpass.

According to the NTSB, the 55-year-old engineer recalled that as the train passed milepost 15.5 it was traveling about 79 mph. He told investigators that he was aware that the curve with the 30 mph speed restriction was at milepost 19.8, and that he had planned to initiate braking about 1 mile prior to the curve.

The engineer said that he saw mileposts 16 and 17 but didn't recall seeing milepost 18 or the 30 mph advance speed sign, which was posted 2 miles ahead of the speed-restricted curve.

The engineer said that he did see the wayside signal at milepost 19.8 — at the accident curve — but mistook it for another signal, which was north of the curve.

As soon as he saw the 30 mph sign at the start of the curve, he applied brakes, the engineer said. Seconds later, the train derailed as it entered the curve.

The engineer said that he didn't feel that having a qualifying conductor in the locomotive with him was a distraction. He also said he would not have gotten behind the throttle if he had any reservations about his readiness to operate the train. He felt rested at the start of the trip, he told investigators.

The conductor was in the lead locomotive to learn the territory of the route. He told investigators that the engineer appeared alert during a job briefing and while operating the train.

In the coming weeks, investigators will compare the crew's accounts with video captured form the inward- and outward-facing locomotive cameras, information from the locomotive event data recorder and other sources, NTSB officials said in a press release.

In addition to human performance and operations, investigators are developing information on a wide range of areas, including signals and train control, track and engineering, mechanical, crashworthiness, survival factors and recorders.

The investigation is expected to last 12 to 24 months, NTSB officials said.