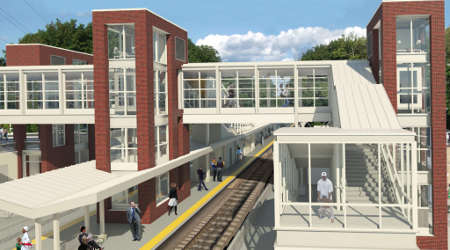 Amtrak began construction this week on a $36 million project to improve the Paoli Train Station in Pennsylvania.

Amtrak officials gathered with state, federal and Southeastern Pennsylvania Transportation Authority (SEPTA) representatives on Tuesday for a groundbreaking ceremony at the station, which will undergo safety and accessibility upgrades.

In addition, the project calls for parking lot improvements, Americans with Disabilities Act improvements to the existing station building and upgrades in rail infrastructure to support other project components, Amtrak officials said in a press release.

When completed, the project will set the stage for future construction of the proposed Paoli Intermodal Transportation Center, a new expansive transportation facility envisioned to serve future growth in the area.

The Paoli Station project is in line with station improvements that the Pennsylvania Department of Transportation (PennDOT) is overseeing at other stations along the 104-mile Keystone Corridor between Philadelphia and Harrisburg, said Toby Fauver, PennDOT's deputy secretary for multimodal.