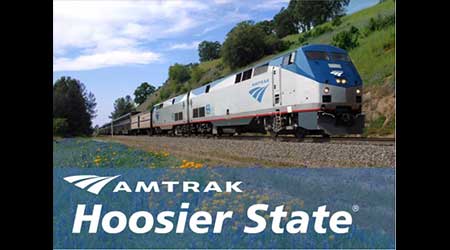 Amtrak plans to suspend Hoosier State service starting July 1 because state of Indiana funding no longer will be provided for the route from that date forward.

A federal law requires states to pay a portion of the cost of certain Amtrak trains and Indiana's state budget does not include funding for Hoosier State trains starting July 1, railroad officials said in an online notice.

Operating on Sunday, Tuesday, Wednesday and Friday, the Hoosier State services runs to and from Chicago, Dyer, Rensselaer, Lafayette, Crawfordsville and Indianapolis. The railroad received formal notice from the state to discontinue the service, which has been removed from the reservation system starting July 1, Amtrak officials said.

Meanwhile, Amtrak also announced plans to continue an infrastructure renewal program at New York Penn Station this summer. To be conducted between June 28 and Sept. 2, a $30 project calls for state-of-good-repair work on an interlocking that directs Amtrak, MTA Long Island Rail Road and New Jersey Transit trains heading east and west from the East River Tunnels.

The renewal of the critical infrastructure — including switches and turnouts — is critical at North America's busiest train station, Amtrak officials said in a press release.

"Amtrak has made record levels of capital investment to improve the reliability of our infrastructure and overall customer experience, and we continue to do so in New York Penn Station for all the users of this important station," said Amtrak President and Chief Executive Officer Richard Anderson.