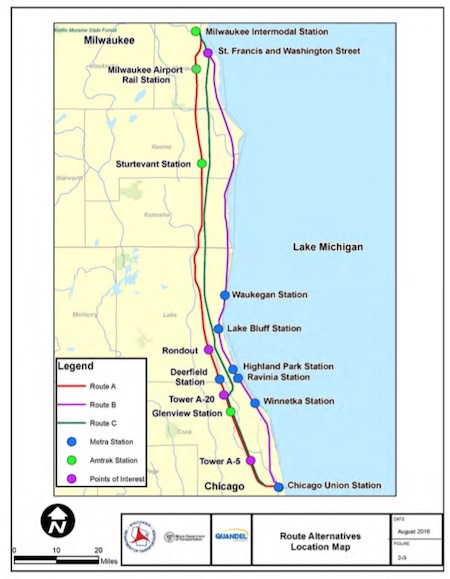 The Wisconsin and Illinois departments of transportation and the Federal Railroad Administration completed the environmental review of Amtrak's proposal to add to the service through operational improvements or increased frequency to meet existing and future demand for passenger-rail service, according to the document.

Public comments on the environmental document are being accepted through Nov. 15. Public hearings will be held Oct. 27 in Milwaukee; Nov. 1 in Chicago; and Nov. 2 in Glenview, Ill.

The proposed alternatives to the route would have no significant environmental impact, according to a statement on the Wisconsin Department of Transportation website.

The Hiawatha line runs between Chicago and Milwaukee, with stops in Sturtevant, Wis., and Glenview. Currently, Hiawatha operates seven round trips per day Monday through Saturday and six round trips on Sunday.

Ridership has been increasing on the route, and many of the trips are over capacity or near capacity. Passenger surveys have indicated a desire for additional frequency of service during peak travel hours, according to the study.

Hiawatha operates on Metra-owned track between Chicago and Rondout, Ill., and on Canadian Pacific-owned track from Rondout to Milwaukee. A majority of the proposed improvements would be constructed within existing rail right of way, according to the study.

Since Amtrak proposed the expansion in early 2015, some Glenview officials and residents have raised concerns about a part of the plan that calls for constructing a 2-mile freight-train holding track that would allow freight trains to stop to allow passenger trains to pass, The Chicago Tribune reported this week.