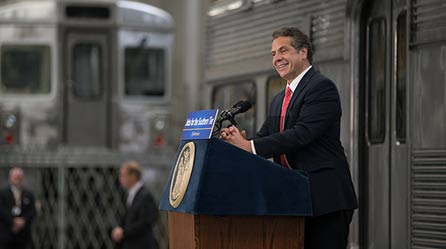 New York's state support for the project was an important factor in Alstom's winning bid for the Amtrak contract, according to a press release issued by Cuomo's office.

The 28 new trainsets will be part of Amtrak's $2.5 billion program to upgrade the Acela Express service in the Northeast Corridor.

Amtrak has ordered Alstom's "Avelia Liberty" train, the latest development of Alstom's high-speed train range Avelia. The new trains will operate at speeds up to 160 mph from the current 135 mph on the Acela line, but will be capable of speeds up to 186 mph.

Alstom's expansion to accommodate the project will add nearly 200 new jobs in Hornell, Steuben County, according to Cuomo's office. The expansion will retain more than 1,000 existing positions in Hornell and at Alstom's operations in West Henrietta.