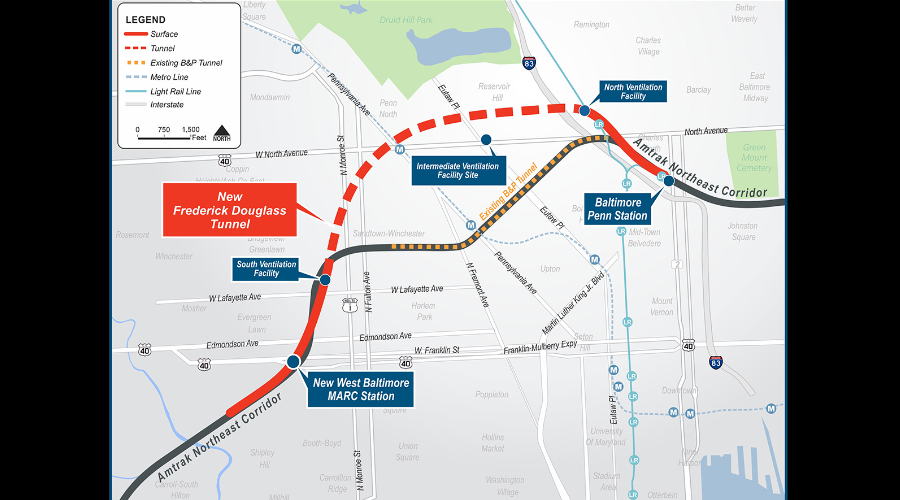 Amtrak, federal, state and local leaders last week announced new plans to enhance and advance the B&P Tunnel Replacement Program, which calls for modernizing the Baltimore rail tunnel and a 4-mile section of the Northeast Corridor.

The officials also announced the new tunnel will be named after Frederick Douglass, the late Maryland-born and world-renowned abolitionist leader.

At nearly 150 years old, the 1.4-mile tunnel connects Baltimore’s Penn Station to Washington and Virginia. Its age-related infrastructure problems include excessive water infiltration, a deteriorating structure and a sinking floor. Also, there are no fire and life safety systems to keep passengers safe in the event of emergencies.

The tunnel is the source of chronic service delays for Amtrak and MARC commuter trains.

All MARC Penn Line and Amtrak trains will use the new Frederick Douglass Tunnel. Maryland Department of Transportation (MDOT) and Amtrak have agreed on a phased implementation approach, where the initial implementation will include two new high-capacity tunnel tubes for electrified passenger trains but defer the construction of two additional tunnel tubes that could be designed to accommodate freight trains in the future.

To enable this new plan, Maryland Secretary of Transportation Gregory Slater announced that MDOT will electrify its MARC commuter trains through the new Frederick Douglass Tunnel.

"This is a generational project for passenger rail in the state of Maryland and the entire Northeast Corridor," said Slater in a press release. "We are ready to work with Amtrak and the federal government to move a new B&P Tunnel forward.

A key benefit of the new approach is that it will eliminate diesel train emissions at a ventilation facility on North Avenue in West Baltimore. The changes will also save two years during construction and more than $1 billion.

Amtrak is currently performing final design and initiating property acquisitions to prepare for construction. Pending sufficient funding for the approximately $4 billion investment, early construction activities on the tunnel’s southern approach could begin over the next one to two years.