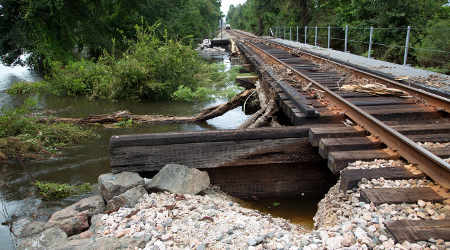 UP Chairman, President and Chief Executive Officer Lance Fritz told the news agency Reuters that pent-up demand from manufacturers in the Houston area and recovery efforts should help boost the railroad's fourth-quarter results.

UP has cleaned up most of the damage to its network, which should be fully operational by the end of September, according to Fritz.

As a result of catastrophic flooding, the Class I was cut off from Houston in every direction.

"Virtually every [rail] subdivision was washed out or under water," Fritz said.

Meanwhile, BNSF Railway Co. has restored rail service on most of its subdivisions in the Houston area and southeastern Texas. All BNSF rail yards and facilities in the region are also open, according to a customer service advisory on the Class I's website.

BNSF's Longview and Silsbee subdivisions near the Louisiana border are out of service. Direct rail service between Houston and locations in Louisiana remain blocked due to ongoing restoration efforts.

"We are also experiencing ongoing challenges involving the primary rail line that provides access, via our trackage rights, to locations southwest of Houston, including Corpus Christi and Brownsville," the BNSF advisory stated. "Major bridge repair work that is needed near Sweeny, Texas, will require an extended track outage. We are re-routing or diverting as much traffic as possible around this affected location as well as other areas that are currently blocked."